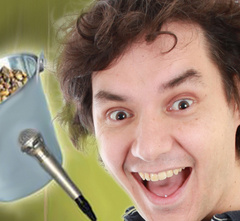 Direct from the quarries of Bombo NSW, comes Shane and his bucket of gravel. Perched stage left on a stool, this unnamed bucket of gravel of undetermined gender has its own microphone and sings duets with Shane. Some banter, jokes, chip eating breaks and various other shenanigans add up to a bizzare hour in the company of this unlikely duo.

With an inanimate object as a singing partner you certainly wouldn’t expect a performance of operatic quality. Shane warbles his way through the tunes while the bucket does a similar job, albeit a highly synthesised version. The fun comes from witnessing Shane selling these silly songs with excessive grandeur, trying in vain to hit the high notes and shoving in way too many words to scan. They are all one joke songs but some are very short to get to their wacky point immediately while others play up on childish repetition to ridiculous proportions.

Aside from the set list of songs and some banter between, the other elements of the show had the appearance of having little structure; although this randomness was likely to have been carefully planned. To add to the confusion of jumping from one odd concept to the next without clear segues, Shane had the habit of cutting some bits short either through his own apathy or lack of audience response. This resulted in most of his segments having their laughs coming from the initial strange concept rather than building to a punchline.

There were a couple of segments that clearly would have been improved with a pay off but unfortunately we were left dangling. The shocking revelation about the bucket was followed up with a single throwaway line rather than an extended exchange between the pair. This lack of clear conflict between them was wasted; the dramatic situation was instantly and inexplicably resolved as the duo sang a song of reconciliation.

Although it may not be a regular occurrence, tonight’s performance featured an ASLAN Interpreter which added some extra strangeness with every strange utterance from Shane’s mouth being signed. Shane couldn’t resist throwing a couple of curly words at the woman to keep her on her toes.

Those who need their cues to laugh clearly sign-posted will be left scratching their heads at this performance. This would not be a show to appeal to a meat and potatoes stand up crowd. Others who like their humour more on the strange and silly side will have a whale of a time.