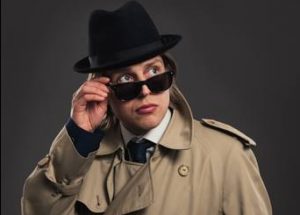 Tom made his MICF debut earlier this year with his well-regarded show Blind Man’s Bluff. As Squirrel writer Lisa Clark said at the time: “It’s really late, after you’ve spent an hour laughing with this joyful, adorable comedian and you leave and think about it, that you realise how seriously dark the undercurrent of this show is. Tom Skelton is telling the story of how he was diagnosed with a disease that took most of his eyesight at a very young age.”

His offering for the Melbourne Fringe Festival sees him move from telling his own real life story, to a more fictitious account of a blind British spy (that just happens to look and sound a lot like Tom) sent to Berlin to gather post-Brexit secrets from the newly created United States of Europe. Along the way, we meet a host of colourful (or shady) characters – some voiced by Skelton, some portrayed by unsuspecting audience members – as he tries to uncover secrets and potential double agents.

It’s a strange structure for a show – a curious mash-up of stand-up, voice recordings, audience engagement, improvisation and narrated story-telling. Fortunately, Skelton is well adept at each of these skills. A seasoned improviser, he is a founding member of several impro troupes in the UK, and has performed with some of Melbourne’s better impro companies. He is certainly very good with accents.

Despite a slowish start, the piece gathers momentum over the course of the hour – and Skelton seems to relax more into the mayhem as the audience gets more and more involved. The plot line is delightfully convoluted, but put across with maximum sincerity. Having performed this piece in Edinburgh and various other festivals, this is a well honed and confident piece of work.

If your Fringe show checklist contains the words fun, inventive, original, multi-disciplinary and currywurst, this could be just your thing.

Blind Eye Spy is playing in the Small Room at Coopers Inn until September 27.
https://melbournefringe.com.au/event/tom-skelton-blind-eye-spy/