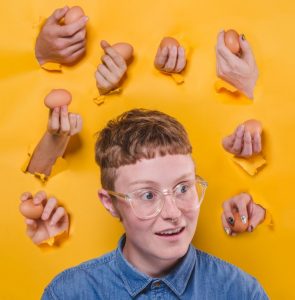 Non binary comedian Scout Boxhall made their solo festival debut with Good Egg and word of mouth of it’s excellence spread quickly so that an extra performance was added in a bigger room to meet demand. After catching this last performance I can report that all the hype and award nomination was justified. This was a brilliant and hilarious show that delighted all in attendance.

Good Egg was a personally political show that didn’t aggressively push an agenda instead playfully poking fun at the comedian’s experiences, the current political climate and societal conventions. Scout regularly diverted down paths of daftness that managed to stick to the point being addressed while being hilariously ludicrous flights of fancy. You will never watch the Federal Budget or listen to the music of Enya the same way again.

In addition to amusing monologues Scout performed hysterial sketches using simple costuming to transform into various wacky characters. Some were presented in a blasé manner as if many ideas were being thrown at the wall to see what would stick but the quality was so consistently high that this on-stage second guessing seemed to be a ploy to keep us off balance. Scout has the funny bones to pull off anything vaguely comedic with an ease and comfort on stage proving that a number of years in straight theatre has prepared them well for the world of comedy.

Stuart Daulman’s directorial fingerprints were all over this show and he even made the odd guest appearance. Scout performed it with ease, fully committing to some absurdly long and uncomfortable set pieces to break through to the hilarity.

The sound design by James Collopy was an essential element to this performance. From the sound effect punchlines to the dry robotic quips, this was an auditory delight.

Good Egg is sure to get a reprisal in upcoming festivals so when it does, grab a ticket posthaste to witness this masterclass in performing a debut show.