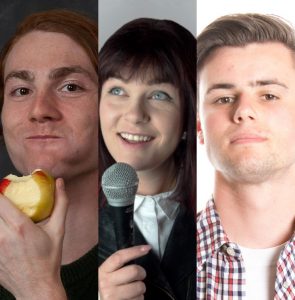 I don’t know about you, but when I was going through school, I never thought about my teachers having a life out of school. In fact, I’m not really sure I recognised them as humans. Imagine what a shock it would be to find out that your teacher was a stand-up comedian in their spare time – and what’s more – a very good stand-up comedian.

Josh Webb, Billie Duncan and Nick O’Connell are all exciting new voices in their respective comedy scenes – in fact, they’re all award winning comedians in their own right. And they’re all teachers. It makes perfect sense, then, for them to join forces to present a very entertaining hour of anecdotes and horror stories about the challenges they face on a daily basis.

Despite all coming from different parts of the education system, several common themes emerge. First and foremost, teachers are undervalued in our society. This is reflected in how people perceive (and treat) teachers, and how dreadfully they’re remunerated compared with less taxing professions. Secondly, there was consensus that working with the kids is infinitely more enjoyable and rewarding than interacting with the students’ parents……

A bit about each performer:

Nick O’Connell kicked proceedings off, and set a fantastic pace and rhythm for the evening. Originally from Adelaide, O’Connell shifted across to Melbourne and landed work in a school on the suburban fringe. Much of Nick’s routine is based on the very difficult circumstances faced by schools in these outer suburban areas. The fact that he looks like a private school lad doesn’t work in his favour amongst his more streetwise charges.

Nick’s style oozes confidence. Some of the lines come out sounding a bit plastic or clinical, but his observations are sharp, and there’s just enough self deprecation in there to win the audience over. His rhythm was thrown out once he found out there was a school-aged child in the audience. I’m sure it was his teacherly instincts that kicked in, with his primary concern turning to whether his material might be damaging to the child’s wellbeing. Thankfully, he soldiered on and everyone was better for the experience.

Up next was Billie Duncan. Billie is also from Adelaide now working in Melbourne (does Melbourne import all its teachers?). But as a fantastic counter-point to Nick, Billie works in the private school sector, so was able to relate a very different set of experiences and challenges.

I wonder if it is her work as a teacher that makes Billie so comfortable with crowd work? She brings to the stage a confident and brashness that I’m sure would make many in the private school system wince. I came away convinced that her life in comedy provides much needed catharsis from her daily workplace!

A lovely part of her routine involved her sharing some of her students’ work – much of it hilarious – and she finished her time with us by sharing a heart-felt email from an ex-student. Great stuff.

Rounding out the evening was Josh Webb. Josh was a Raw Comedy finalist 2017, surprisingly not from Adelaide. As the only substitute teacher in the show, his material was based around a completely different set of experiences and perspectives on teaching – much of it on an ‘all care and no responsibility’ theme.

Josh has a delightfully dry and unassuming delivery. His perfectly understated observations are mixed in with some purposefully cringe-worthy word play. This is very funny work, from a young performer you should definitely keep an eye on.

The Joy of Working with Children and Other Lies is a welcome contribution to the 2019 Melbourne Fringe. It gives three very impressive young comedians a chance to strut their stuff, delivering material which is obviously very close to their hearts.

The Joy of Working with Children and Other Lies is playing in the Small Room at Coopers Inn until September 27
https://melbournefringe.com.au/event/the-joy-of-working-with-children-and-other-lies/