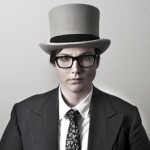 If anyone ever tries to tell you that female comedians aren’t funny, just point them in the direction of Hannah Gadsby and then see what they have to say for themselves.

One of Australia’s brightest comedy stars, Gadsby is the kind of comedian who makes it all look so easy, like anyone could base a show around a 15th century painting and make it utterly hilarious. For the record, they couldn’t – but Gadbsy can.

In her new show, Hannah Wants a Wife, Gadsby talks about her two great loves: art and women. As you might guess from the title, the subject of gay marriage comes up, but as Gadsby says, she only wants to get married so as to make it “harder for someone to leave me”.

The focal point of the show is Gadsby’s favourite painting, Jan van Eyck’s famous Arnolfini Portrait. Gadsby clearly knows her stuff as she takes the audience through the symbols and meanings hidden within the painting, but this is no drab art history lesson. Gadsby’s enthusiasm is infectious, and her own personal interpretations of what the painting means are
hilarious.

Gadsby’s show has plenty to say on marriage, time-travelling lesbians, gender roles and why fat people aren’t built to survive the apocalypse. It’s a clever, thought-provoking show that has the audience frequently in fits of laughter. Just don’t expect a big finish, that’s not her style – Gadsby prefers lot of little peaks throughout the show. Wink wink.

Regularly seen on TV’s In Gordon Street Tonight with Adam Hills, Gadsby has been doing quite well for herself and it’s clear to see why. She’s warm, funny and sharp as a whip, and infinitely likeable. Hannah Wants a Wife is a great offering that’s definitely taking the time to see this festival.