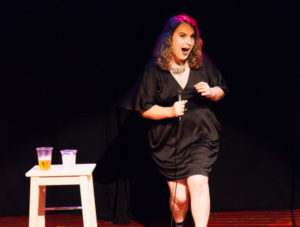 Anna Piper Scott is such a brilliant stand up comedian. Forged in the dark comedy rooms of Western Australia, she comes to us, having journeyed throughout Australia, with all of the skills of the best kind of comedian. She owns the stage, keeps the laughs rolling and is a joy to spend time with.

Anna is warm and welcoming and understands how to make others feel safe and included. Even hecklers, who, rather than spoiling the show, gave Anna the space to prove how fucking awesome she is at dealing with them. Adding them to the show, so that the experience is part of the whole, she’s going to accept them and get big unexpected improvised laughs out of it without being unnecessarily nasty. This makes the rest of the audience feel safe and included as well. Impressive stuff. Some comedians say they are inclusive, but Anna really means it.

Last time I saw Anna it was in a two hander with Sofie Joske called Almost Lesbians. It was one of my highlights of the 2018 festival. It too was warm and welcoming but also kooky, sketchy and a bit rough around the edges. There is nothing rough about Queer and Present Danger. Highly polished, well written and executed, Anna has blossomed and found her voice and her comfort zone on stage. This was a very personal coming out show but I also love the topical and political stuff that make appearances. She names political names making the audience gasp as they laugh. Perfect edge for a late night show at the Festival.

It’s only been just over 3 years that Anna has been out as Trans and one of those years was barely a year, so it’s impressive that she can joke about it all with some perspective. There are a few dark moments but it’s not long before we are laughing again. I am in awe that she’s been able to create such a beautiful, emotionally satisfying and breathtakingly funny Festival show out of her experience. Anna is one of those people who is a born comedian. She can’t help it.