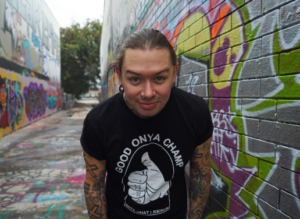 You may have seen heavily tattooed, long-haired Nat (otherwise known as Nat’s What I Reckon) laying waste to pre-made jar sauce on YouTube or your social media pages during lockdown. His frank, often profane, no ‘piss farting about’ kitchen-bench banter was a breath of fresh air in dire times. If only he could translate his attitude of using exclusively fresh produce to his live Festival show On Purpose.

The moments where Nat performed to the audience, taking the piss out of questionable internet self-help tips or roasting comments left by internet trolls projected on the screen behind him were well received. Similarly, the brief glimpse into his past, sharing photos of his childhood (or a “seamlessly” Photoshopped facsimile where an actual photo was not available) had the audience enthralled, along with the stories he shared about his experience of those times. The wisdom of a thirteen-year-old acquaintance Steven sticks out, as does the story of Nat contracting glandular fever and, of all things, tuberculosis at the same time and losing half a lung.

Addressing the kitchen-sized elephant in the room, Nat even shared an exclusive ‘How to’ cooking video, made especially for the odd experience of watching it midway through a live show. It worked; the fourth wall in tatters, the audience in titters, all the fun of having your cake and eating it too, or in this case; tuna bake.

As On Purpose progressed however, it shifted tonally, erring more towards Nat emerging from behind the projector screen, to introduce YouTube clips from the Nats What I Reckon archive. Setting aside the entertainment value of the content, it felt odd, disjointed and more so unnecessary. One particular video focusing on the Sydney public transport system moved as slowly as the Light Rail the clip was bemoaning. ‘Public transport is rubbish’ is a lukewarm take at best, and if I wanted to watch someone complain about trams I could just as easily jump on the 57 back to Flinders Street.

After a strong start, the show lost momentum as it sacrificed the innate spark of live comedy, and to borrow Nat’s What I Reckons ethos, it felt a bit like being served jar-sauce comedy. The point of watching live comedy is watching the show get ‘seasoned’ on the fly, watching the performer add a touch of bite or sweetness as the show requires, modulating the flow of energy between audience and comedian to get it just right each time.
Seeing what could have been a sumptuous feast being co-opted for reheated leftovers leaves something of a bitter taste in your mouth.