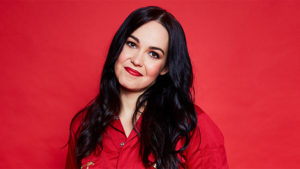 As soon as Bec Charlwood took to the stage, there was little doubt that the crowd was in for an interesting ride. In the opening stages, she jumped, twerked and danced to Christina Aguilera’s ‘Dirty’ to kick things off, before pointing to the inappropriateness of the show’s early start time of 5pm – an hour when the elderly are typically tucking into their dinner for the night.

One could hardly disagree, considering that many of Charlwood’s jokes revolved around salacious topics such as sex toys, sexually transmitted illnesses, visiting the gynaecologist, and her mother’s sexual appetite. Such was the hilarity of Charlwood’s delivery that the mood remained undimmed by the jarring time. And, of course, Charlwood doesn’t disappoint: her show certainly lives up to its suggestive title.

Dirty Girl doesn’t have a rigid structure or a central narrative; it is composed of discrete stories from Charlwood’s own experiences. None of them flopped from a comic perspective, while the longer, drawn-out ones were the more successful. In particular, the parts dealing with the generational rifts between baby boomer and millennial women were both hilarious and socially cutting.

On the comedy scene for over six years now, Charlwood was evidently at home on the stage. She exuded confidence, yet retained her sense of self-awareness – a fine balance many comedians fail to strike. That certainly bodes well for her career, and it is hard to not see her continuing to carve out an audience for her explicitly sexual, expletive-laden comedy.

Dirty Girl is showing at the Westin until 4 April. Tickets are available here: