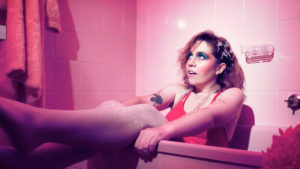 A show of ideas. Some of them were excellent.

My overarching response to this show is that it is scheduled at the wrong time of day. I’m unsure if this is a wilful choice or a logistical challenge, but Toast Rat would benefit from a later slot, some more alcohol and energy in the audience. 4:15 is a show time I can get behind, but maybe not ideal for Claire Sullivan’s mad-cap, erratic selection of ideas, gags and character comedy.

The performance feels like a lucky-dip selection of characters, thoughts, stories and gags that Sullivan has experienced or thought up over the past year (or two). They range from joyously silly character pieces about a middle-aged yummy mummy trying to charm a police officer to detailed descriptions of a threesome and a scattering of Claire dealing with the death of her father. The range of emotions was enormous and it’s incredibly brave of Claire to include her father’s passing amongst the silliness as it is a visibly raw topic for her. Her stories of back-pack steak boy and living in a shed are wonderful and the “angler fish” line about her friend’s butt-hole will stick with me for a long time.

The pleasure in this type of show for an audience member is that if the current segment isn’t landing for you, the next one might and there is bound to be something in this show to make anyone laugh at least a few times. The less positive is that none of the ideas gets enough airtime, the titular Toast Rat appears a few times throughout the show, and is funny, but doesn’t add anything to the structure and doesn’t really develop from the first appearance. It almost felt like Claire was holding some of the chaos, energy and madness back… the joy of running screaming “I want my toast” into the audience is making people a bit uncomfortable, when toast rat reappeared, I was expecting and hoping the boundaries to be pushed further, to watch audience members squirm and hope that they aren’t going to have to get involved. This may again be a result or a reflection of the early timeslot. I can’t help but feel this show would play out differently at 10:30pm.

Overall Toast Rat is an enjoyable hour, it’s very fringe-y, very Comedy Festival-y. I would hesitate to recommend it to people who like their comedy to be a person telling jokes for 50 minutes, but if you’re game for a bit of a random wild ride, it is a fun one. The self-comparisons to The Mighty Boosh and Fleabag are fair, but there is a lot of polish and refinement needed to come close to either. One or two fewer ideas would give the rest of them space to breathe.