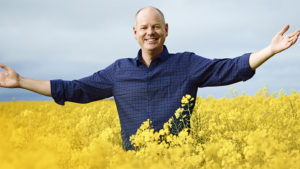 Many would recognise Tom Gleeson as the smart arse on Hard Quiz and to others, including Tracy Grimshaw, he is the man who pilfered the Gold Logie but here he is the brilliant stand up comedian. Gleeson’s show is unbridled with enthusiasm and goes through a range of personas, which at times has him behaving as a lawyer and others a firefighter.

Gleeson, who refers to himself as a drug trafficking scallywag, is a professed true-blue Aussie, with lines like “I chopped up that bit of road kill for me dogs”. Gleeson’s laconic nature has a knack with the audience, which at times makes you question if you are sitting comfortably at home. Gleeson’s Lighten Up is a one hour show but you won’t feel short changed, as his style treats the live audience more like a personal cabal rather than anything else.

Gleeson’s show is highly emotive at times with his use of tone and character changes. The only sour point of Lighten Up is that you are sure to think twice about having a lolly, but not for the reasons you may suspect. However Gleeson demonstrates why he is one of Australia’s comedic stars as his wit and ironic style shines through. Gleeson is sure to make you feel like a contestant on Hard Quiz with his impromptu questions and soothsaying demeanour. Ultimately, Gleeson will strive to make you comfortable throughout his own self deprecating ordeal. It is sure to be traumatic for Gleeson and entertainment for the viewer.

This is a performance that would be sorely missed at this year’s comedy festival, as the hiatus caused by Covid has certainly had no impact on Gleeson’s ability to be one of comedy’s finest.

Lighten Up is on at The Comedy Theatre until April 18