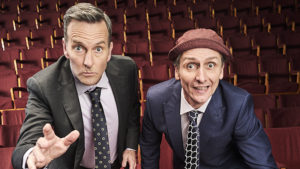 It’ll serve as no surprise that the stars of Lano and Woodley are, indeed, Lano and Woodley, one of the most successful Australian comedy duos ever. After formally reuniting after 20 years in 2018 with the show Fly, the coronavirus pandemic interrupted their revived partnership for the best part of a year. But now they’re back (again), this time delivering a show, full of sketch and slapstick skits that will please their fanbase and newcomers alike.

Lano and Woodley isn’t easily describable, but anyone with the faintest familiarity with them would immediately recognise their chaotic, frenzied comedic style. Yet, there is also a meaningful design to the proceedings; it’s amply clear that much planning has gone into the choreography and rhythm of individual scenes and the show as a whole. The songs – of which there are many – demonstrate this quality, especially when Lano and Woodley sing together in unwitting, conflictual duets. Of course, both of them are equally capable improvisors, with Lane playfully berating some front-row latecomers over the entire show, while Woodley humorously riffed off an audience member’s unexpected profession. Even when one of them misspoke stuttered over a line, that sometimes spawned new comedic openings. Lesser performers would have let this temporarily derail their show.

Although both excellent comedians in their own right, Lano and Woodley go up a notch together. The essence of their partnership is the oppositional styles they adopt. Lano is irritable and supercilious, Woodley credulous and blinkered, comedically embodying the ancient Yin and Yang principle. The set-up is often similar, but always rewarding: Woodley persists in his idiocy – like believing ‘Artica’ is a real place – to the point where Lano cannot help but unleash his frustration.

Woodley has the better of the two roles, and more comic freedom to generate the biggest laughs. He is Australia’s best ‘wacky’ comedian by some distance. Though Lano is hardly left the scraps, and makes the most of the spotlight on several occasions over the course of the show. His rendition of the ‘moving’ song, ‘100 green bottles on the wall’, just about matches Woodley’s ludicrousness.

At one stage, Lano remarked to no one in particular ‘I’m not sure if this qualifies as entertainment’ in the aftermath of an especially risible episode. The crowd, cheering, clapping, and laughing throughout, most certainly thought so. Of all the shows veering outside the parameters of traditional stand-up, Lano and Woodley is probably the most memorable of them.

Lano and Woodley is showing at the Arts Centre (Playhouse) until 4 April.