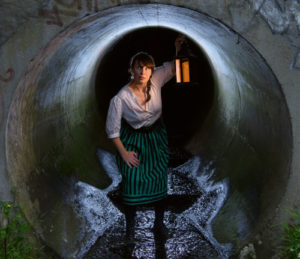 Comedian and science communicator Alanta Colley is back at the festival with On the Origin of the Faeces, a show based on a beloved topic of playground humour: Poop! She explored the physiology of defecation and Gut Microbiome as well as the cultural, religious and historical aspects.

It was not just a show about excrement, she also covered shame, anxiety and being out of your comfort zone. A number of hilariously embarrassing scenarios from her life (all involving poop) were presented for our squirming pleasure.

Like most comedic lectures, there were a few stretches where facts overwhelmed the jokes but on the whole the balance was fine as she regularly followed up the data with zingers and groaners. Colley used every opportunity to use a poo pun, both as a punchline and in the segment titles displayed on screen. Humorous political analogies served double duty by clarifying points and satirising the political machine

The stage was a sparse affair with Colley standing stage right at the microphone and a monitor at the left. She used slides to illustrate the anatomy involved and provide visual aides to punchlines. The performance wasn’t particularly animated as she related her tales, instead relying on expressive voice and facial expressions to colour the stories. This didn’t hurt the impact of the material but it did make it feel more like a lecture than a comedy performance. It was entirely understandable as concentrating on the dense script of facts and figures was slightly more important than bouncing around the stage.

Not a show for the prudish, this was a fascinating and amusing performance that took a base topic of comedy and gave it a somewhat respectable air. Fear not connoisseurs of potty humour, you will still get your fill as you learn a thing or two.