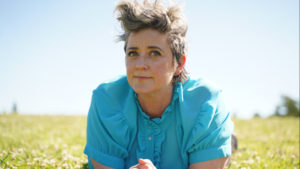 Chris Ryan has been performing and running rooms in Canberra for seven or so years and won Best Newcomer at the Sydney Comedy festival in 2019. Her first solo Melbourne International Comedy Festival Show feels a bit like she has thrown all her favourite material at a wall hoping it will stick. Quite a bit of it did, she has some very funny ideas, but she lost the audience at one point and the show wasn’t strong enough to fully win us all back.

There are several threads running through Big Hair Big Dreams, much of them lacking context and making a lot of her topics feel a bit shallow and all over the place. The main one seems to be about dreams, though we never quite find out what they are or were, for Chris. She seems unsure, yet feels she’s somehow failed to achieve them. I should’ve realised from her Festival Guide blurb, which she repeats in the show “If any of them had worked out, she would not be doing this show”.

So. Why are we all here?

For a laugh I guess and tonight she gained a lot of laughs from an audience of tipsy, rowdy, middle aged ladies who were sooo up for it. Nudging each other with barely whispered outbursts “It’s so True!” and “That happened to ME!!” etc. A lot of my enjoyment was about how excited and giggly they got about hoarding condiments!

Then about half way through she broke our faith. When we all sympathised with her for being slighted as a teen with a big “AWWW”, instead of rolling with it, she stopped and actually chided us “Oh you BELIEVED that? I just made that up!” The audience was a bit quieter after that. How could we believe or relax and enjoy anything else she told us in her set? She’d had the audience in the palm of her hand and then she threw it away.

She mentions one of her Mum’s dreams at the end of her show but it would’ve been nice to explore the differences between her and her Mum’s dreams earlier, like when she was pitching her funny reality show idea Mum Swap. Some of her darlings should’ve been cut and kept for another time. She has a really dramatic tale to tell towards the end but it sadly felt a bit under written and somewhat tacked on. Maybe it needs more time for reflection. The ending was also a huge letdown after a big lead up. It was like she couldn’t be bothered to commit to it. But maybe that was the point of the show?