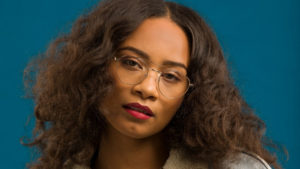 My initial observation of Woke 2.0 was how deftly Aurelia St Clair demonstrates that quintessentially Australian quality of being able to take the piss out of herself. In truth, what Aurelia demonstrates time and time again throughout her show is that the idea of anything being “quintessentially” anywhere is outdated. Aurelia takes the piss out of herself and society with hilarious flair.

This young woman of German and Cameroon descent shares stories spanning her life. The stereotypes of being German, and of being black are contrasted, often at almost exact odds with each other. St Clair skewers the gentrification of dumpster diving as “free-ganism” in the magazines she loved as a teen; much to the horror of her Jehovah’s Witness mother. Her take on the metaphors employed by Jehovah’s Witnesses to laud the preservation of virginity was an applause break earning highlight of the show.

Aurelia delivers her material with a sardonic drawl and a winning smile, gleefully aware of the delicate sensibilities of her predominantly Caucasian crowd. Drawing on her unique upbringing this German and Cameroonian Melburnian raised a Jehovah’s Witness almost certainly has a perspective you haven’t considered. And isn’t that what being “woke” is all about.

You can see Aurelia St Clair perform Woke 2.0 at The Victoria Hotel until April 18th