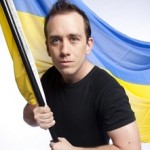 But more of that later, because, what this show primarily is, is hilarious. McGinlay got a single response to his opening greeting from a man in the back row who turned out to be Polish. Being ever the professional, McGinlay used that as a cue to tell an amusing Polish story. Asking the audience for any other languages spoken he also got French and Arabic (both from the same Polish guy) and came out with funny anecdotes about trying to speak both languages. I was tempted to put my hand up and tell him that I speak some Auslan (Australian Sign Language). Turns out that he had a bit about that too, which he did later in the show. I wonder what language would have stumped him.

McGinlay is huge fun as he takes the audience through a tale of love, family, culture, oversized dogs, the death of Osama Bin Laden and ultimately about learning Ukrainian to impress his finance’s family. McGinlay chops and changes subject matter, handling complex digressions with ease. He tackles a range subject matter, from the broadly appealing Hollywood film re-construction, to the more engrossing topics such as a potted history of the Ukrainian Civil War.

McGinlay ends the show with one of the best call-backs I’ve ever seen. He relates a shaggy dog story from earlier in the show, but this time in Ukrainian. Identifiable by the sounds and name peculiar to this story, the pinpoints of recognition brought huge laughs from the audience and completed a hugely enjoyable show.