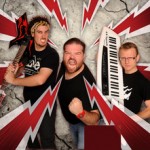 Entering the Hi-Fi in Melbourne never fails to put one in the mood for a proper rock gig. And I am glad to say no one was disappointed with the rock gig we were treated to.

With the appropriate amount of imaginary pyrotechnics introducing the show, the three performers made their entrance onto the stage with an obligatory epic introduction song. With their title, one would expect nothing less. The humour from this show mostly comes from making fun of themselves, each other and pop culture in general. Some of their onstage griping at each other can become a little repetitive, mostly they just point out their peers’ most obvious imperfections in different ways (Benny is short, Lee is stupid, etc), but overall it did well to fill the gaps between each song to make a flowing, laugh-packed show.

Within their set you will find all of the different types of rock n roll songs you would expect from any other rock band. There’s the straightforward rock song “Floppy Guy”, the heartfelt love song “The Language of Love” and of course the hit single that you just KNOW they’re going to finish with, “Four Chords”. There was plenty of new material, new jackets and topical humour in the banter between songs.

While they definitely do well in keeping the laughs fresh throughout each song, there were one or two songs where the punchline would come thirty seconds in, and anything said or sung beyond that point just repeated the original joke. When the song itself went for up to four minutes, this left a lot of wasted time without any real humour. I was obviously not the only one thinking this, as the audience’s laughs were certainly fewer and less enthusiastic at these points. That being said, on the whole this was not a major flaw; the vast majority of the songs kept themselves fresh throughout.

A great show, definitely worthy of a sold-out status. If you can get there, do so.