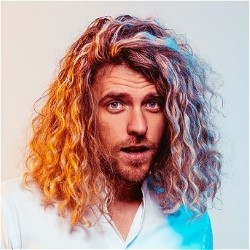 A chaotic start to the show, as the audience couldn’t find the entrance and most staff had no idea. Eventually we were all herded grumpily to the backstage entrance. Not a great warmup act for a Comedy show.

The cheery energy of Grant Buse soon had us forgetting the outside world, while laughing and tapping our toes. Grant took us back to the simpler times of the 1990s, a time when I had dropped out of the mainstream somewhat, so I missed some of the references to boybands and Sex & The City. I also don’t think I’ve ever had a Calippo, but there were enough general references to get some laughs from me. The rest of the audience were having a wonderful time, though, and a lot of the later parts of Grant’s show were more entertaining (for me) as he analysed people’s adoration of the good bits of the past and teased the audience with some very funny songs about love and lockdown. The finale was brilliant, partly thanks to a couple of gents dragged up from the audience to help him, and a big finish full of lycra and hair work.

Like most other comedians in this year’s Fringe, Grant included a section about the Covid lockdown, in which he was forced to leave his budding career in the UK and return to the family home in Brisbane. Does anyone think about the parents in this situation, being forced to have their adult children back home after a brief period of freedom? Anyway, SentiMENTAL! was an engaging hour of high energy songs, nostalgic stories and jokes, with a frenetic ending that will have you dancing out the door.

SentiMENTAL! is on at Gilded Balloon Teviot
https://tickets.edfringe.com/whats-on/grant-buse-sentimental