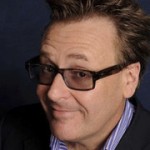 He’s back and, unlike normal people, not mellowed with age. At this, his 20th (or 25th) year at the Fringe, he is playing in one of the big tents in the Assembly Gardens, quite appropriately called the Elegance, a room with wood panelling, mirrors and stained glass windows to let in the evening sun and bathe us all in a beatific glow, which is quickly dispelled when Greg comes on stage.

He starts with the Olympics and how the opening ceremony could have been improved, and then goes on to entertainingly insult almost every group/race/class/creed/religion he can in the hour. He also had to contend with noise from a nearby Irish band which became a drumming group, so Proops the comedy veteran adeptly worked them into the routine as he was going. He swears and berates the audience if they don’t get his jokes or laugh loud or quickly enough for his liking. It isn’t a show for the faint hearted or those who prefer their comedy slow and obvious. The routine about Ex-Mrs Macca which moved into an abuse session about the Scots, the Irish, the English, modern music, sport, Nascars and finally US politics, where he left us rather abruptly.

It involves very strong language, a bit of knowledge of American culture and politics would be handy (I didn’t understand why he eulogised US bacon, which is apparently ambrisoa). Greg pointed out his shows are getting earlier every year he comes to Scottishland from Californiania (as he calls them) and he predicts he’ll be doing a lunchtime show on the Royal Mile next year (with a weasel up his bum). Not likely.

Fans will love it all of course. See him if you love comedy that comes fast and multi-layered. I think they should rename the room the Curmudgeon for his shows, though.

Greg Proops is playing at The Assembly George Square in The Elegance.