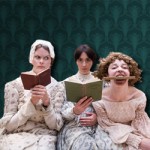 This show is in a tiny little room at the Assembly Halls, which can get very hot so I was amused to learn that the show sponsor is Ideal Heating. Maybe they should think about an air-conditioning manufacturer for next year’s sponsor? The three girls, Sophie, Megan and Vanessa-Faye, purport to be portraying important ladies throughout history. They are actually just mucking about and being very silly with important ladies throughout history. I recognised parodies of My Sweet 16th/Made in chelsea/pimp My ride (or whatever it’s called), Jeremy Kyle (Jerry Springer lite) and some other ‘modern TV shows’ that I don’t watch. The characters being trashed include Elizabeth, Mary and Mary, the Bronte sisters, Boudicca and her daughters, Napoleon and Josephine (and Nelson) and either Virginia Woolf or Nicole Kidman (they had passable Aussie accents).

There are songs, dances, some art (I particularly liked the dick & head pictures, a rude Latin motto, a very rude animated sequence using a Terry Gilliam set of Romantic artworks and a very ‘interesting’ version of a Kate Bush song. At one point near the end of the show there may have been a missing cup, which led to some water spitting. I do hope it was ad lib, otherwise I’ve been fooled! There is also a place where I was expecting someone to lose an eye as the pencils started flying. Health & Safety obviously haven’t been anywhere near the show. the costume changes were quick and at no time was the stage entirely bare (although one of the girls did get close to that state). While I was bemused as some of the references the rest of the audience, who obviously turn the TV on occasionally, were having a ball with some still talking about their favourite sketches ages after we’d left.

As long as you’re not really looking for a historical re-enactment with pretty frocks, but you could do with an hour of silliness and verve, this is a top pick, Bring a fan.