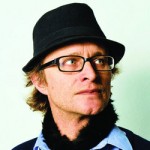 Simon Munnery is always pushing the boundaries of stand up and this performance is no exception. Broadcast via video link from the middle of the room, he performs sketches, monologues, puppetry and songs to camera using all sorts of video trickery to create a unique and hilarious show.

Keeping the audience’s attention fixed on a screen rather than the performer is a slightly odd, disembodied experience but it works brilliantly; the strange relationship between audience and performer sitting well with Simon’s often surreal material. A re enactment of his wife’s swim around the island, a musical tribute to the creator of the Zeppelin and a Mexican stand off are amongst the silly scenarios played out for us.

Mixing between 1mulitiple cameras he could create all sorts of visual transitions and interesting effects that provided something a million times more interesting than a bloke standing on stage. Simon kept some stand up tropes in his monologues (perhaps a microphone is a safety blanket) as well as adding the odd visual item for emphasis that echoed his “League Against Tedium” days. He enacted scenes using creatively crude paper puppets as characters. It was a little clunky at times but that added to the charm.

This is not a one man venture as musical accompaniment is provided by Mick Moriarty on guitar. As well as the wonderful musical backing to Simon’s singing/rapping he provided a soundscape and score to the sketches that fitted perfectly. He was able to convey moods to fit with the action in a seamless manner.

As a break for himself, Simon screened a short film he had made called “Rubbish Night”. Although he prefaced it with a warning that it may not be particularly amusing, the crowd found plenty of things in it to chuckle at.

My highlight of the Fringe thus far, Simon once again embraces the spirit of the Fringe and gives us something far removed from your basic stand up show. Bravo Mr Munnery, Bravo!

Simon Munnery – Fylm Makker is on at The Stand
http://www.edfringe.com/whats-on/comedy/simon-munnery-fylm-makker