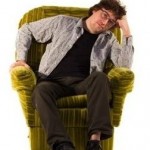 Alasdair Tremblay-Birchall’s new show Trying Hard is probably best described as a show with identity issues. But I don’t mean that in a bad way. It’s just that its two halves are so dissimilar it’s like you’ve been privy to two completely different shows. And hey, there’s nothing wrong with that.

Having seen his last show at the Melbourne International Comedy Festival earlier this year, this definitely seems to be a new, quirkier direction for Tremblay-Birchall. There were elements that were very Pythonesque (which he actually admits to, rather self-deprecatingly) and some that even seemed inspired by the style of 2012 Barry award winner Dr Brown.

The first half of the show is Tremblay-Birchall’s own strange interpretation of the creative process of writing comedy. I don’t want to give away how he does it, but it’s a little left-of-centre to say the least.

My advice: stay with it. Like Dr Brown, what may seem confusing and nonsensical to begin with eventually pays off. Even if you know you’ll have a hard time explaining it to people afterwards, it does make for some entertaining and delightfully original comedy. The phrase “you had to be there” comes to mind.

The second half is much more traditional stand up, and a lot more akin to what I’ve seen Birchall-Tremblay do previously. This is where his personality really comes out, as this kind of geeky-but-loveable dude who’s just trying to figure out what the hell he’s doing with his life.

Knowing that I saw only the second performance ever of this show, I’m choosing to ignore the parts that were a little rough around the edges. I’m sure it will only improve with time, because let’s face it, Alasdair Tremblay-Birchall is name you’re going to be hearing a lot more in years to come.

That is assuming he doesn’t throw it all away to evolve into a businessman… oh never mind, you had to be there.

More information can be found in the Fringe Guide