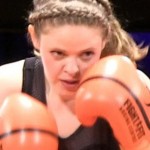 When Tegan announced at a gig that she had signed herself up to train for a professional boxing tournament you couldn’t help but think that this was a bit of an extreme way to go about creating material for a festival show! She just doesn’t look like a boxer which of course she plays to great comic effect. So the first part of the show is about convincing us that boxing is something she really wanted to do, just as she, no doubt, had to convince disbelieving friends and family.

Though 24 Tegan Higginbotham looks like a highschool girl and not the sort of girl who gets boxing experience from punch ups behind the bike sheds. It’s also hard to believe that Tegan is almost a veteran of the Melbourne comedy scene starting in Class Clowns in 2005 and then in the following year getting together with Adam McKenzie and Rob Lloyd as part of The Hounds trio and now with Adam as Watson the duo and part of the team who puts together The Shelf comedy nights and podcasts.

Years of comedy experience and performance training are evident in her confidence and all the work that has gone into making this a successful production. Tegan is savvy and lucky enough to have one ofAustralia’s most skilled comedians Justin Hamilton to direct her debut festival show. She has also been around the comedy traps trying out parts of her show for many months and it has paid off with a polished performance that has laughs all the way through. Tegan has no props or film footage (as promised in the Fringe Guide – apparently it did not trial well with test audiences) instead, with only a few dramatic lighting changes and her passionate oratory skills, she has us in the gym with her.

Tegan brings all the colourful characters of the gym to life but when she finally finds herself in the ring in front of 1,500 spectators, wearing oversize shorts and smelly 2nd hand gloves it was shocking to me that she knew the moves but had no game plan or knowledge of how to start the match. Let alone how to deal with the confronting issue of having to punch a dear friend in the face and receive blows in return. As a trained performer it is fascinating that Tegan has chosen to be both a comedian and a boxer, she obviously has some seriously masochistic tendancies!

The show is at it’s most impressive at the end where Tegan holds the audience in the palm of her hand as her comedic story culminates in the riveting, dramatic account of her first professional fight. Not surprising then that this was nominated for Best Newcomer at The Melbourne International Comedy Festival. New jokes about current issues prove that the show has not rested on it’s laurels, Tegan has revisited it with a professional refresh. This is definitely a show worth revisiting and if you’ve not heard of it, it is a festival must see.