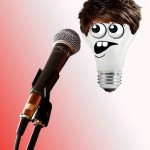 In this one man character showcase, Dylan Cole presented a parody of the conference series and website NED which aims to “spread ideas” through 15 minute presentations from individuals, usually experts in their field, on a wide range of topics. The poster for the show even mimics the TED Homepage with a collection of bizzare topics accompanying the video links.

The first speaker to take the stage was Dr John Hatzenberger, a dishevelled Academic who got quite flustered while essentially not saying very much. He had an interesting way of de-constructing the NED Speech Format during his spot; an ideal aid for the audience to become acclimatised to the shows’ structure. His ability to pad the speech with highly detailed talk of his procrastination was a delight and his inclusion of random often irrelevant quotes to make a point was inspired lunacy.

Next on the stage was Joel Ham, apparently a Buddist Monk whose talk was sponsored by a very un-Buddist company. He posed unending rhetorical questions and talked in infinite circles about contentment and choice. A clever and amusing visual demonstration left no one in the audience any wiser as to his point. This character was a little one note, a Monk talking in riddles at varying volume levels, but was enjoyable nonetheless.

The last was Prof. Jeffery De Hollander, a very plastic personality who laughed in finite doses at his own obligatory jokes. His topic was Creating the Creation of Creativity and included clever visuals of famous artworks to relate to a hypothetical person to illustrate his points. Some wonderfully bizzare facts and figures were spouted to poke fun at his credibility. Although this segment started out strongly with many witty lines peppered throughout, it ended on a rather serious note which was an odd way to conclude a show.

All the characters were fleshed out well, costumed simply but effectively, given brilliantly absurd biographies and displayed appropriate extreme mannerisms. A running joke involving a sequence of images suggested the presence of recurring tropes in these types of speeches and pushed it to the extreme.

The decision to concentrate on motivational topics rather than the scientific gave him enough ammunition to attack such self righteous, agenda pushing types. I haven’t explored the TED website enough to determine whether such characters are in the majority in this arena, but they were fascinating personas and it was fun to witness them being taken down a peg or two. This was an interesting concept for a comedy show which delivered plenty of laughs.

NED: Ideas you’ll never have is playing at Trades Hall – The Annexe until October 13.
For booking details visit the Fringe Festival website http://www.melbournefringe.com.au/fringe-festival/show/ned-ideas-you-ll-never-have/