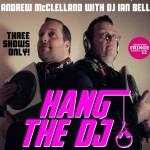 Andrew McClelland (a comedian who DJs) and Ian Bell (a DJ who dabbles in comedy) have joined forces to give a comedic glimpse as to what happens behind the DJ decks. The show got off to a flying start with a high energy dance medley covering many genres (a impressive effort from two portly gentlemen) and went on to explore many facets of their experiences in the industry utilising stand up, banter, song and dance. A lucky punter was even transformed into a DJ complete with witty moniker!

The boys bounced off each other in spite of this being the first time they had worked together on the comedy stage. The banter between the two was jovial and amusing. Trading witty lines, they often surprised each other with some of their comments and actions and this enjoyment on stage was infectious. They mined their differences in musical tastes for some laughs but for the most part the pair were on the same page to impart their passion to the audience. There was the odd fluffed line and missed musical cue but this added a nice sense of anarchy and spontaneity.

Andrew was a charming performer as always; full of puppy dog excitement for the material. He presented wonderful stand up spots covering his details of his background that may explain some things to long time fans concerning his eccentricities, demeanour and outlook on life. Most interesting was his staunch determination not to lapse into potty mouth territory (despite Ian letting slip) by employing euphemisms that were cleverly inserted into a call-back.

Ian spent the majority of the show behind the decks (where he was most at ease) but he was no mere button pusher responding to Andrew’s jokes. There were many opportunities for him to take centre stage to present amusing monologues (such as thanking Dr Hook for his introduction to Djing). He ably assisted Andrew in the re-enactment of a number of amusing scenarios including the wonderful “Song Requester from Hell” segment where he did a hilariously foppish impression of Andrew while Mr McClelland played the other parts. Also impressive was the demonstration of his almost serviceable singing ability during a montage of celebrity snaps (complete with a hilarious James Brown moment).

This show was not wrapped up in the traditional sense, instead we were treated to an invitation to witness the guys (and the newly christened DJ apprentice) plying their DJ trade and dance the night away. Armed with a Boombox, Andrew led us pied Piper style down the hall to the Bella Union bar where the fun times continued for several more hours. This fusion of comedy, music and dancing was a brilliant way to end an evening.

The last performance of Hang The DJ is on tonight (Oct 13)
For booking details see the Fringe Festival Website http://www.melbournefringe.com.au/fringe-festival/show/andrew-mc-clelland-feat-dj-ian-bell-hang-the-dj/