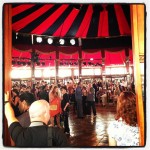 Aaaaaaand we’re off! The Melbourne International Comedy Festival was officially launched today at The Famous Spiegeltent at the Arts Centre with deliciously dry host Hannah Gadsby being appropriately disrespectful toward the ‘VIP’s and cheeky to the officiating Lord Mayor. Most comedians are interstate or overseas, with the Adelaide Fringe Festival in full swing, but spotted in the audience were Lawrence Leung (Part-Tme Detective Agency), Aamer Rahman (The Truth Hurts), Brian Nankervis (Rockwiz), Andrew Goodone (voice of the Melbourne International Comedy Festival Gala), Janet A McLeod(Cinema Fiasco), Jessie Ngaio (Slutmonster & Friends), Hayman Kent (The Comedy Zone). 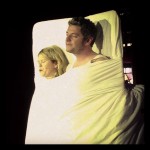 Over champagne and lamingtons we were given a taste of some of this year’s talent and the official speeches. Bite sized performances to whet our appetites for the Festival were served up by Moosehead Awarded Kate McLennan & Wes Snelling in Double Standard which will be performed in a hotel room at The Blackman (Justin Bieber stayed there apparently) as well from Windmill Theatre who dazzled us with some nerdy choreographed energetic bike riding from their show School Dance.

From Festival Director Susan Provan we learned that this year there are over a (record breaking) thousand participants in RAW comedy, Matt Okine will be this year’s host for the National Grand Final and that for the first time one of the finalists will be drawn from India. She also spoke about a new movement of comedians who are proving themselves on YouTube and have well selling shows at this year’s MICF despite not having tread the boards in comedy clubs. The Festival crew are particularly proud that this year’s program features an entire page of Daves. (p49, though in one case it’s not the name of the comedian) 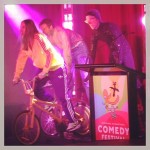 We were all given the first programs to study, and they’ll be out for the general public with sponsors The Herald Sun on Saturday 23rd of February. We’ve previously reviewed some of the shows on offer and will be doing a story about that soon. We’re also currently publishing lots of “5 Good Reasons to see” MICF shows to give you more information in helping to organise your Festival calendar. We’ll be bringing more interviews, news and reviews as they come in. So stay tuned to Squirrel Comedy for all your Melbourne International Comedy Festival information.