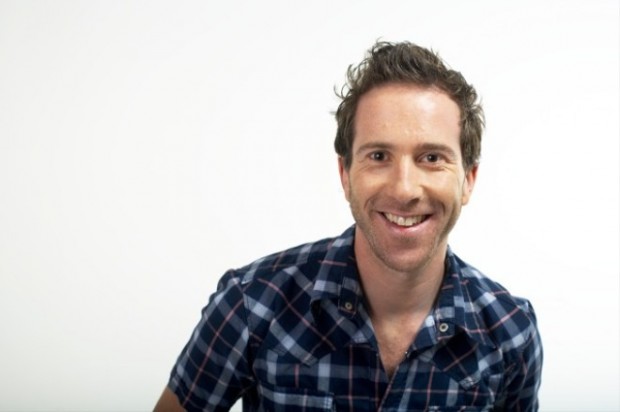 Last year Adam Rozenbachs travelled through Europe with his dad and tweeted his experiences along the way. If the tweets were any indication, Eurodad should be hilarious. Adam took time out of his pre-festival pressures to answer a few questions about himself and his new show.

When why did you start doing Standup?
I started in 1999, at The Espy, a comedy institution at the time. Why? Stupidity mainly, now that I look back on it. But I had a love of stand-up, and used to go and watch whenever I could, so I thought I’d like to give it a crack. And I’d been doing Triple R for about two years [Crud Boys 1997-99], so had been writing for that time. It was time to take away the safety net performance wise. Plus, I thought I wasn’t having enough feelings of insecurity, so wanted to bump that up a bit.

Who inspired you in Comedy?
I idolised the D Generation/Late Show/Martin-Molloy era of Australian comedy. Having met them I can see why they were/are so good [they steal a lot].
We also used to listen to Bill Cosby on family trips in the car, so I remember how much I enjoyed that. Although it was a bit muffled hearing it from the boot. And dad took me to see Billy Connolly when I was about 16, so that had a huge impact on me, watching people, including dad, lose their shit for about three hours.
I also heard my first Rodney Rude tape when I was about ten. I probably understood most of the jokes in it when I turned sixteen.

How do you write your festival show? Are you very disciplined?

I’ll start off with chunks, bits, words, occasional letters, and then slowly try and piece them together. Then I’ll print that out, go to a cafe or a pub or crack den and try and joke it up – adding bits and pieces here and there to try and add strength to the strong bits.
I go through patches of discipline. I’ll write and be productive, and then I’ll leave it for a bit or procrastinate, and then I’ll get mad at myself and force myself to sit down and write. It’s all part of the process. I’d like to see how many of the classics would be around today with the nuisance of the internet at hand. I bet Tolstoy’s book would have been War and I Can Haz Cheeseburger.

Are you still writing at the last minute or do you like to have it ready to go for the previews?
Probably about four of five days prior I’ll stop writing so I can start to learn it. Mostly the order, as by that stage I will have only done it from start to finish maybe twice.

Then, the day after my opening show, I’ll furiously re-write, regretting all those times I kicked back looking at cats on the internet, thinking it was a good show.

Do you usually practice bits of it in comedy clubs?
Yep. It’s nice to have a few bits ready to roll for the festival, so you know they’re solid and reliable.

This show has been a bit different to previous years, as it’s my first real narrative, so it’s a bit harder to do ‘bits’ in the clubs/rooms, as it will seem a little disjointed without all the other information surrounding it. Well, that’s what i tell myself when it doesn’t work. But I have been able to work up bits by changing them slightly so they can stand alone.

Is your dad OK about you writing a show involving him?
Probably not, but unless he wants me to move back in because I have no cash, he’ll have to be.

He didn’t want to be on the poster, but I said he’d be in the background, blurry and unrecognisable. He’s not.

I think he’ll quickly work out I lie to him a lot.

Are there stories that you can’t put into your show?
Mostly the thoughts that ran through my head about how I could bump my dad off and make it look like an accident.

Have you travelled with your father as an adult before?
No. And if you ask me that question again in twenty years, the answer will be “ONCE!”

Did you have to change the way you travelled i.e. nicer hotels etc?
Absolutely. I can be a bit of a loose traveller i.e. decide what to do when I arrive in a city, but I had to be more rigid with planning, as I didn’t want dad wandering around with his luggage looking for accommodation. I also cut back on a few things I would want to do, as dad wasn’t interested. Like, for example, fun.
Dad didn’t really like to talking to strangers either, which really cuts back your drug purchasing options.

Be honest did you put yourself through this hell hoping to get a festival show out of it?
How dare you be so cynical about a comedian. But yes. 100%. I hope people appreciate what comedians go through for a show… Twenty one days for an hour’s worth of material is not the greatest ratio.

How has been the experience of working on The Shelf?
The Shelf is fantastic. And working with Tegan Higginbotham has been great. We do a weekly news segment, and i always enjoy reading her stuff when she sends it through to be printed out [I’m the printer owner of the duo]. I love the process of writing news jokes too… getting the story, and then trying to think of a take to have on it. Plus, we can be particularly dark and get away with it as we’re just newsreaders telling it like it is, right?

Justin Hamilton brings together some of the best comics in Australia, so it’s great to grace the stage with them. And nice to try and include them in the gags sometimes.

And The Toff is a brilliant venue.
How will you cope working on two shows during MICF – The Shelf and your solo show?
Once it’s all bedded in, things should run smoothly. That’s what I tell myself. In reality, i will be a burnt out wreck on day two who somehow stumbles to the finishing line, crying and wailing. But, you know, in a funny way.

Luckily The Shelf is on a Monday, which is my day off Eurodad – so at least i can take a break from that and write some news gags.

Are you hoping/planning to guest on other shows during the festival? [i.e. Setlist, Festival Club, various podcasts, etc]?
I’d love to do Setlist. Thinking about it now scares the shit out of me, but I’d love to know how I’d react at the time. Probably with a lot of swearing and regret to be honest.
And once you’re in the Comedy Festival, you try and do as much as you can – Festival Club, podcasts, spots, alcohol… whatever is around, I tend to jump at as it’s nice to be a part of it all.

You do a lot of writing behind the scenes, do you think of yourself as primarily a comedy writer or performer or both?
Initially I though of myself as a comedy writer, but I think in the last few years the balance has tipped over to performer. But I enjoy all facets of comedy – it’s just so much fun to try and find the funny, no matter what the medium. Unless the medium is mime – then you can just fuck off.

Tim Minchin told anyone who’d listen (inc. Andrew Lloyd Webber) that his dream was to play Judas in Jesus Christ Superstar and it worked, as Andrew kept him in mind when he needed to cast it in a hurry. Do you have an ambition you’d like to share with us?

To play in a Carlton premiership. And trust me, I’ve been pestering Mick Malthouse about it. But I’ve since given up on that, mainly because I’m not allowed within 500 metres of him.

Did Becoming one of Cleo’s 50 Most Eligible Bachelors get you laid help get you a girlfriend?

It actually didn’t. The only thing that increased was mocking [up 400%] and disbelief ‘How did you get in there?”. Unfortunately not that many people in the circles I move in read it, no matter how many copies I left lying around.

Eurodad is on throughout the Melbourne International Comedy Festival
http://www.comedyfestival.com.au/2013/season/shows/eurodad-adam-rozenbachs

Adam will also be appearing at The Shelf on Mondays during the Festival
http://www.comedyfestival.com.au/2013/season/shows/the-shelf

as well as somehow squeezing in hosting duties at The Comics Lounge
http://www.comedyfestival.com.au/2013/season/shows/hosted-by-adam-rozenbachs-live-the-comics-lounge