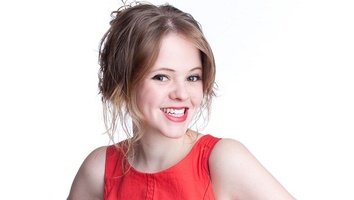 Tegan Higginbotham has been around the Melbourne comedy scene a long time, yet still seems like a fresh faced kid. Last year she told us about her new hobby – professional boxing in her debut solo standup show Million Dollar Tegan which gained a lot of praise and thankfully didn’t end with her coach euthenising her. This year she is talking about her childhood obsessions in Touched by Fev. She began her comedy career performing wild fast-paced sketch shows with Rob Lloyd and Adam Mckenzie as the Hounds. This has morphed into Watson without Rob and they will be performing Once Were Planets this year. Apart from her work with Watson and her own stand up solo show, she will be doing her regular Monday night spot at The Shelf at the Melbourne International Comedy Festival this year. Tegan is clearly very busy at the moment, but she kindly found some time to answer my questions.

How Long have you been doing comedy and how old were you when you did your first comedy gig?

Did you always want to perform on stage?
Unfortunately, yes. I was that annoying kid who made my parents sit down every night to watch my latest piece of theatre. I just never would have thought that one day I’d actually be enjoying them laughing at me.

Who in comedy has inspired you?
Celia Pacquola, Judith Lucy, Nick Cody, Justin Hamilton and my good friend Adam McKenzie.

Does your work with Watson inform your stand up and visa versa?
I think that the joke writing skills I’m learning from stand-up have most definitely helped with my writing for Watson. But I was actually surprised how little all the years of performing sketch helped when I finally got the balls to get up on stage by myself. It was a whole new game. I kept running out of breath because I was waiting for someone else to start delivering lines but it NEVER HAPPENED

Do you think the timing and running around with Watson helped you be a better boxer?
“Better” would imply that I’m any good. I’m terrible at boxing. Just ask the trainers.

When did you decide it was time to do solo standup?

I felt like it was a natural progression. And I’d been hanging around with stand-up’s for so many years I felt it would have been wrong not to give it a go. But specifically, I was 21 when I bit the bullet.

Was it hard to step out on your own away from the support of Adam McKenzie & Rob Lloyd?

Absolutely. Not only in the sense that performing solo was difficult, but the support they offer after a show is invaluable. When you’re part of a group, you all ride the hard shows together and share the blame, so to speak. Whereas having to pick yourself up after a bad stand-up set can be a very tricky task indeed.

Did they prepare you for life as a comedian?
Adam and Robby taught me right from the get-go that to be a successful comedian you have to work incredibly hard. During our very first comedy festival we would often be performing three times a night, so doing that now seems quite natural. In this way, they did help. Robby and Adam also exposed me to a very unique style of comedy that I would have missed completely had I just gone straight into stand-up and I’m very lucky that I got a fabulous opportunity to experience that and experiment with them on stage.

When you were growing up did you ever see yourself as a comedian, who punches people as a side hobby?
I saw myself as Ripley from Aliens. So the punching thing was certainly there. It’s the comedy I’m surprised by.

Have you enjoyed working on The Shelf?
Defintely! But it still scares me. Sometimes I find myself standing on stage with people who are SO much better than me and I have to stop myself from freaking out or yelling “You’re from the TV! Say hi to my Mum!”

How do you plan to juggle 3 shows at this years MICF?
With a mixture of coffee, Lindt and pure adrenaline. Wish me luck.

Have you done much hosting at comedy gigs?
A little bit. I’m hoping to do more and more over time. It requires a really fabulous set of skills that I haven’t quite mastered yet. Harley Breen, who is another comic I look up to, once pointed out to me that when you’re performing a solo-show, you ostensibly have to be your own MC. So it helps to be good at it.

When did you start thinking about this as a topic for a festival show.
A long time ago, actually. I usually think of my shows long before I attempt to write them. In fact, I already know what my very last show will be.
I second guessed “Touched By Fev” a bit and considered doing something else for a while. But for me, there was too much to talk about and I’m genuinely interested in the subject matter. It felt right.

How do you write a show, in bits and pieces, in big chunks?
I actually don’t have a set style of writing just yet. Last year it was matter of experiencing boxing, then simply taking note of what happened. This show has involved more research and delves a little further in to personal stories.

Are you disciplined, do you have a routine or is it more organic?
Organic.

Do you think you can make this festival show appeal to people who know nothing of Aussie Rules or Brendan Fevola?
The show is also about Harry Potter, so I’m hoping that if people aren’t massive AFL fans, they’ll come for the Potter instead. That being said, I have written this show with a non-sporty audience in mind as well, and I’m pretty sure that they’ll still understand everything hat’s going on.

What’s your favourite thing about taking part in the Melbourne International Comedy Festival?

I have been thinking about this answer for 20 minutes now. I just have to pick something, don’t I?
Um…oh god! It’s so many things! It’s the laughter; both from an audience and from myself as I watch Adam try to keep a straight face each night. It’s the incredibly warm feeling you get when someone enjoys something that you’ve written. It’s huddling with other comics on the steps of The Melbourne Town hall and sharing battle tales. It’s feeling a little bit spesh for a whole month. It’s meeting new people and eating pizza at 1am on Swanston Street and so many things. I honestly can’t choose.

Tegan Higginbotham’s Touched by Fev is on upstairs in The Spleen Bar throughout the Festival – There are NO performances Mondays, Fridays & Sundays

Watson – Once Were Planets is on at Trades Hall

The Shelf – is on for three nights at Toff of Town