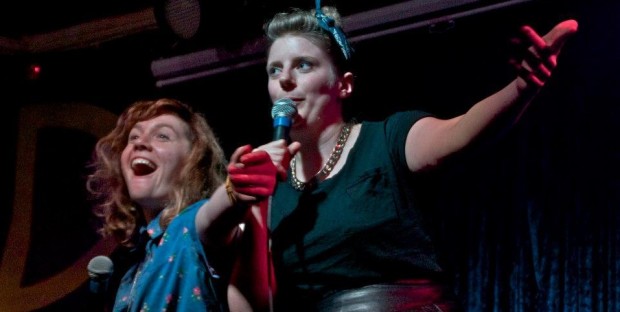 Two relative newcomers to the Melbourne stand up scene, Claire Sullivan and Lauren Bok have joined forces for their debut festival show. The result is a wild hour of stand up and general mucking around.

Of the two, Bok is the most conventional stand up the two; regaling us with routines about working in retail and her unusual surname. It is solid material with a plenty of verbal imagery to bring her jokes to life.

Sullivan is the veritable loose cannon with plenty of random thoughts and surrealism while frequently interacting with audience members with silly acts or questions. Her on-stage persona is a ditzy bundle of hyperactivity which was a joy to watch.

At various intervals throughout each stand up set, the performer not currently on stage comments from the other side of the room (usually about how the show was going) or instigates a random segment of craziness (a particular highlight was the literal enactment of a pop song). Afterwards, the stand up set continues as normal; an interesting format choice that keeps the audience on their toes.

The show gets very self-referential at times (much to the delight of the comedian heavy audience I was in). Comedy savy punters don’t mind having the veil lifted occasionally but it is often pushed to breaking point. They manage to get away with it by being highly engaging and coating everything in a liberal layer of wackiness.

The girls remind me of that other Melbourne duo Dingo and Wolf without the comical aggressiveness. Sullivan assumes the role of the silly one but doesn’t suffer the humorous torment from the more serious Bok as you would normally expect from the classical comedic duo. I sensed that the interaction between the two had been tacked on to their individual stand up sets later in the development process. Even so, these exchanges are rewarding in the way they revel in a pure silliness and the audience can’t help but get swept up in it. It’s a great first outing for a couple of ladies to keep an eye on.

Sullivan & Bok are on at The Imperial Hotel