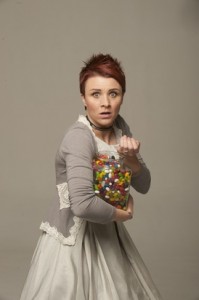 Energetic, bubbly and young at heart, the local favourite from across the Tasman is always a draw card in Melbourne. In Cal Wilson’s new show, she takes on the role of councillor, experienced life coach if you will. Cal is here to help us, help us face our fears in a open and trusting environment, a open forum on the topic of Guilt.

Before you even see the stage, Cal has got you soul searching, asking her audience members to write down on a piece of paper what we would like to stop feeling guilty about, while queuing. It’s a clever ploy to get you thinking and suck out the audience anecdotes, scattering them throughout her own. There were some doozies this night, and some great ones Cal’s collected from previous shows… sorry, no doctor/patient confidentiality during this consultation.

The topic of guilt is a treasure trove of comedy, Cal recalling her own long held guilts from sibling toy crushing guilt as a kid, awkward teenage sex guilt, awkward religious-god-fearing-boyfriend sex guilt, parent betrayal, son betrayal, the list goes on! It’s a relatable and hilarious timeline of Cal Wilson guilt, what makes us guilty, why, and how do we overcome it.

Cal recalls tales and explores the topic with pep and a sense of child like wonder, if you’re not into the show at the beginning, she’ll wear you down with her enthusiasm and by the end, you’ll be enthralled. Audience participation is gold once she gets there, but sometimes it felt like teacher asking questions none of the students wanted to answer, but like I said, that enthusiasm sucks you in eventually. Her quick wit helps her get the most out of any participation, and takes care of any hecklers/wafflers swiftly.

Guilty is a well balanced mix of masterful tale telling and audience “counselling” that’ll just make you happy, a sure bet.