Here’s Five Good Reasons To See Splendid Chaps. Only we did Eleven, to match the number of Doctors… 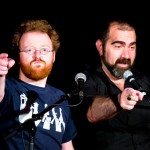 1. It’s Doctor Who’s 50th Anniversary this year, and Splendid Chaps is basically a birthday party. Who wouldn’t attend a 50th birthday party? Some kind of monster, that’s who.

2. If you love humorous yet well-informed and thoughtful discussions about Doctor Who, this show is for you, probably. If you like the phrase “nerdy Tonight Show”
you’ll like Splendid Chaps.

3. It’s also a podcast recording, so your enjoyment will be immortalised forever. Future generations – and your friends right now – will be jealous every time they hear your laugh and will be reminded of the emptiness of their own lives.

4. Splendid Chaps: A Year Of Doctor Who has topped the iTunes Film & TV podcast charts, and sold out previous shows. So they’re a safer bet than your cousin’s friend’s show with the made-up quotes on the poster.

5. Speaking of which, Doctor Who archivist Andrew Pixley called Splendid Chaps “tremendous fun”, Time Out called it “a smash hit” and the Bigger On The Inside podcast called it “semi-professional”.

6. The chaps behind Splendid Chaps are comedian Ben McKenzie (Dungeon Crawl, “patron saint of geek comedy”) and writer John Richards (ABC1’s Outland, Boxcutters podcast). They were born to do this.

7. They are joined by co-host and factmeister Petra Elliott (Melbourne Museum Comedy Tour). Listen to Petra and you’ll actually learn stuff. This show will make you smarter. And smarter is sexier.

8. There’s fabulous guests! ABC3 Steam Punks host Paul Verhoeven and JJJ/Rove’s Dave Callan will talk about Tom Baker in show one, and Fox FM/Outland’s Adam Richard and a super special UK guest (who we can’t name) will be discuss the role of comedy in Doctor Who in show two.

9. There’s fabulous prizes! Thanks to BBC on DVD there’s a door prize where you could win a shiny disc (possibly Shada, or The Ark In Space – Special Edition!).

11. Like any good Tonight Show, they always end with a song. DO YOU END WITH A SONG? No. Case closed.