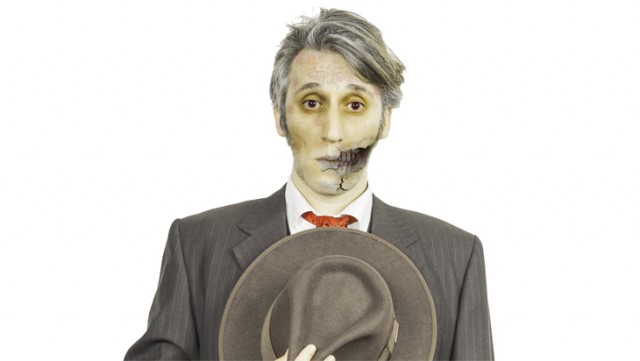 This is an awesome show by master story teller comedian Dave Bloustien. I’ve been enjoying watching his comedic talents grow and improve over the years and have never been disappointed. Dave has been working on The Grand Guignol for some time and all his toils and dragging puppet booths through airports have paid off.

The hour is made of of several tales, all tinged with horror which often comes as a surprise, even though you know it’s how the show is promoted and the house music is made up of great boppy horror classics by The Cramps and The Damned. We are willingly led with humour into dark places by some delightfully demented characters, such as the be-fezed Professor Mahmoud of the Cairo Museum telling the Tale of Tutankhamen’s penis and creepy door to door beat poet Tupperware Jack.

Dave also appears as himself giving the audience a short chance to relax with his own personable style of stand up, explaining how the title and content were inspired by an alternative theatre of early 20th century Paris which was a sort of extreme Punch and Judy with more realistic effects. Thus we are also treated to a gorgeous puppet show framing the stories, using both shadow puppets and hand puppets designed by Henson-trained Lana Schwarcz. These are not the sort of puppets for children, but I think teenagers would love this show.

The Grand Guignol is an impressively planned and cunningly crafted production. The hour flew by with the audience shrieking with laughter and gasping with horror throughout. The narratives, moving from warm and amusing to often surprise horror twists, occasionally reminded me of the style of many modern Dr Who stories. There are so many surprises that I don’t want to spoil. I just recommend that you go along and find out for yourself.

If Dave Bloustien ever has to fight in court again to prove he is funny (see his previous show The Social Contract) – a taste of The Grand Guinol should win his court case effortlessly.

Grand Guignol is on at Trades Hall til April 7