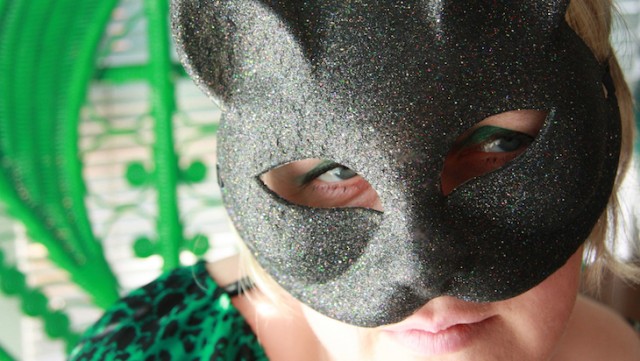 Alexis “Lexi” Simmonds is 41, single, heavily into craft and the proud owner of two cats and a dog. After bounding onto the stage as a wannabe leather Cat Woman, this self-professed Cat Lady tells us colourful stories from her life; from dates with dodgy characters to being a crafty superhero. Some would argue that there is too little obsessive adoration of her feline friends but the stories are interesting enough to hold your interest.

There are quite a few interesting ideas and amusing lines in this show but Lexi’s poor delivery works against it. Her lack of ease on stage could possibly be dismissed as the timid and socially awkward stage persona she is attempting to portray but her bold introduction suggests otherwise. Her timing isn’t the greatest and words often fail to flow easily. The result is punch-lines that lack the required punch and too many flat spots. It is more like a friend telling stories in her lounge-room and regularly getting herself into a verbal twist as she tries to get all the details correct.

Many props emerge during this performance, mostly her highly creative crocheted covers for mundane objects to transform them into items of power. These possessions are passed around the audience for all to witness their beauty and ingenuity.

Lexi has clearly put in the hard yards to include plenty of colour and movement in this performance. She sings a number of parody songs based upon various popular indie tracks that relate to the story at hand. Her singing voice is pleasant enough to listen to, but most of the backing tracks still have their original lyrics intact revealing that she has only changed some of words. This makes clarity an issue and things regularly become glorified karaoke.

A lack of experience and a lot of rough edges results in this show being a bit too patchy to be a barrel of laughs. Spending time with this kooky lady could give you a few chuckles.

Tales of a Straight, Single Cat Lady is on at Caz Reitop’s Dirty Secrets.
http://www.comedyfestival.com.au/2013/season/shows/tales-of-a-straight-single-cat-lady-alexis-simmonds