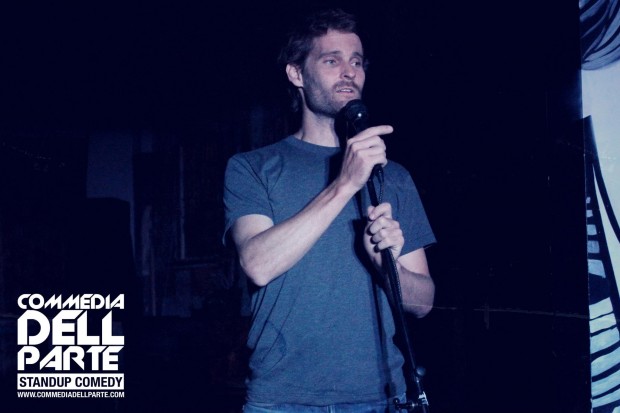 Commedia Dell Parte may well be one of Melbourne’s best kept secrets. It’s got a reputation for holding a great “underground” night where new and high profile comedians can test their new and existing material. To the good fortune of everyone in the packed house, many of the performing comics provided samples of their upcoming Melbourne International Comedy Festival shows.

The night was MC’d by Sean Ryan (co-runner of the night) who commands attention on the stage with his Ned Kelly / ZZ Top style facial hair and comedic style of storytelling. He’s great at giving examples about how not to win friends and influence people – in a wide variety of settings. To his credit, not all examples feature him as the villain. He maintained the pace of the night well and kept the audience grinning throughout.

After Sean’s intro, the first act was Lijretta who is a unique comedian who hails from Ambassell, Ethiopia. With his sunglasses planted firmly on the top of head, he got the audience laughing straight away with a series of punchy observational one-liners. The highlight of his set came when he took everyone through an odd situation on the tram which involved two good Samaritans almost coming to fisticuffs. His show at the Melbourne International Comedy Festival is called The Lijretta Show.

Jay Morrissey stormed onto the stage and showed everyone how his thousands (not millions) of miles an hour style helped him win the Victorian final of the RAW competition. Whether he was talking about mind-altering experiences at work or how females find it easier to garner support on Facebook, he generally had the audience in stitches. Check out his #bollard show at the current festival.

Xanda Allen then came on looking like he’d come straight from a Whitesnake concert. Purely based on his look, he demanded attention on the mic and used his visual gags to extreme effect. In fact, if he grows tired of comedy, he could do well on the catwalk. Melbourne needs to see more of this guy because he has the X factor.

Dean Eizenberg’s quirky style provided an interesting change of pace for the night. He also used the intimate stage to full effect for his visual gags – mixed in with his stand-up of course. If comics are going to use some edgy material (see: bad taste gags), they need to be able to come back with a strong punch. Based on the crowd reaction, Eizenberg’s sucker punch almost hit the mark. His unconventional style of stand-up was a gas though.

Ronny Chieng hit the stage and unleashed a volley of jokes towards the audience for the length of his short set. For some of his material, he loves to use his ancestral roots as both a source of boasting and piss taking. After all, we are currently in the “Asian Century”. He’s clearly got a keen observational wit and an acidic tongue to match. He took exception to poor old (or, young) bar tender who had the audacity to capture his attention which was a highlight. His show at the current festival is “Can you do this? No you can’t” and would be well worth it.

Steele Saunders then took the mic and immediately took control of the crowd. In fact, this man oozes stage presence and doesn’t mind taking a risk with a bit of banter with the audience. His power set was a mixture of short gags and extended stories – which both went down well. Don’t make a fool of yourself in a nightclub when Steele’s there because karma may make you pay… His show at the festival is The Steele Saunders’ Venue Got Demolished Late Night Show.

Daniel Connell is a rising star and this stunning set proved why. His voice has the calming effect akin to a doctor which helped him connect with the audience. On this particular night, Connell took the audience on a journey of piss-funny storytelling with the highlight being his tumultuous (and sumptuous) upbringing. In fact, he made most in the audience lose their appetite based on the groans… See his Mr Personality 1988 show at the festival!

The night ended with Luke Heggie whose dry style of joke telling makes Dave Hughes sound like a giggling Rodney Dangerfield. He peeled off joke after joke and whipped the audience into a wee-in-the-pants frenzy. What a way to end the night. He obviously dislikes people with jet skis, sneaky strippers and would rather drink paint that head to the horse races and/or greyhounds. Unsurprisingly, his upcoming show at the festival is called Mega Dry. Check this man out!
Following Radiohead’s lead, the night is run on a pay-as-you-like basis with most being happy to part with a fiver or a tenner on the way out. If you’re ever around the St Kilda area and have a free Thursday night, Commedia Dell Parte is a perfect place to hear some short and punchy sets from a wide selection of comedians.