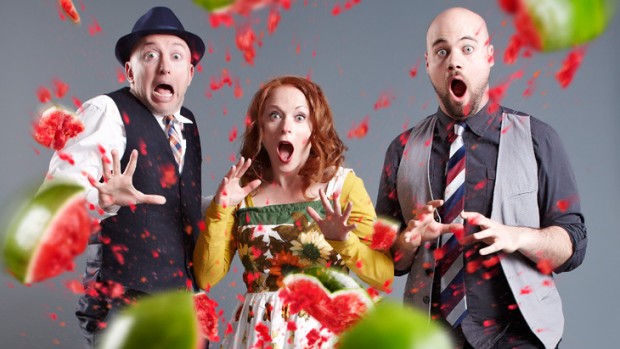 This was a children’s comedy festival show commissioned by The Arts Centre and they couldn’t have picked a better bunch of people to put this together. Conceived and Directed by Laura Milke Garner the radio play veteran (Whodunnit live Radio plays, 3RRR & much more) and written by Kate McClennan (who’s also in Standard Double) with her esteemed ability to create comedy characters. It is performed by three of the most expressive comedy character actors in Australia; Justin Kennedy, last seen in the gorgeous romantic comedy Donna & Damo (2010), Lana Schwarz (actress /puppeteer, co-creator of Puppet Slam) and Xavier Micheledis (who’s solo show at MICF this year is Good Morning! but was also invited to perform with Rich Fulcher in Tiny Acts of Rebellion).  All brimming with charisma and joy they play multiple roles and are supported by the hardest working sound tech at the Festival, Brett Maverix, making all the amazing sound effects in the story, because this show is done in the style of an old fashioned radio play. Brett and his props take up half the stage!

All the kids (and I) are given a paper bag and a rubber glove to add their own special effects when asked. These and other sounds contributed by the audience, such as buzzing bees and gasps and dinosaurs, were signaled by large cards with pictures on them. This is all practiced at the outset giving us a taste of what is to come and making you wonder how a dinosaur is going to fit into the story. The story itself was about a brother and sister, Sam (Xavier) and  Maddy (Lana), forgetting their Dad’s birthday and then deciding to do up his shed into a music studio (which they name The Super Speedy Sound Shed)  before he gets home from work. For this they need to go down to the futuristic shopping centre guarded by a store security dog/donkey named Connie.

Justin Kennedy and his adorably rubbery face plays the story’s Narrator and acts as a sort of adult authority to the children who often gleefully ignore his advice to their peril. Justin also plays many of the shop keepers they meet such as Mr Sprodly Sprocket the spring salesman, funk singing Dizzy the musical instrument salesman and Mike of Mike’s Mics. Xavier’s other characters include the kids’ Dad Cyril, the farting flying baboon mirror salesman and Connie the dog/donkey. Lana is absolutely perfect as Maddie and also plays the shopping center announcer and Shirley the train driver. Meanwhile the sound effects guy is running all over the place creating farts with with a tube trumpet, vomit with a fishtank and jelly lumps, and a sound system with a theremin, he also had lots of bells, whistles, shoes to stomp, chains to rattle and glasses to tinkle. Then of course the kids got to join in at regular intervals when the big cardboard signs were held up.

There were a couple of tiny glitches with the first performance of such a complex piece that will be ironed out by these performers quick smart, no doubt. It will also improve as the performers become more familiar with the rather word heavy script and perform to each other and the audience more.  The important thing about it is that the kids were for the most part transfixed, becoming completely involved with what was going on throughout and enjoying the participation when it happened. This is an ambitious kids show put on by a swag of talented people who know how to make sure the adults will get a big kick out of it at the same time.

Super Speedy Sound Shed is only on for 5 shows – at the The Famous Spiegeltent at Arts Centre until Sunday April 7
http://www.comedyfestival.com.au/2013/season/shows/a-live-radio-play-super-speedy-sound-shed