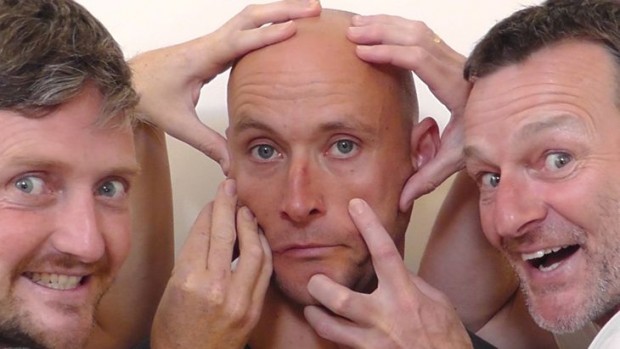 It must be a bit irresistible for a writer to write about writing. There are many, many examples of writers as protagonists such as Adaptation or Barton Fink, and Bob Franklin’s comic play reminded me a little of the recent cerebral romp The Seven Psychopaths without so much blood soaked violence. Sometimes it’s hard to know where reality stops and fantasy begins.

Ostensibly it’s about a writer of comedy named Simon and played by writer/actor Steven Stagg having a bit of writers block while being pestered by his annoying, arrogant housemate played by Stephen Curry (The Castle and he was Graham Kennedy in The King) prancing about in very short shorts. His housemate denies wanting to be a writer but keeps offering his opinions and crazy character ideas that come to life as Bob Franklin (The Librarians) in wacky outfits and accents.

Simon keeps quoting classic writers such as George Bernard Shaw, William Burrows and even Kierkegaard while his flatmate conjures up clichéd sitcom characters. They discuss comedy tropes like running gags and surprise twists and of course these magically manifest themselves in the play we are watching. The play is being created in physical form as it is being created in the mind of the writer.

From the beginning this seemed like there was a lot more going on under the surface. It became clear that we were getting a view inside Bob the writer’s head. I think the obsession with biscuits was the big giveaway, and the tribute to The Cheese Shop sketch using tea was gorgeous.

The intellectual, occasionally smug Simon thinks he is controlling things but he is blocked creatively while his housemate, who acts as the instinctively driven id part of Bob’s brain taunts him by having ‘characters coming out of [his] arse.’

The Writers might not be for everyone, writers will probably have the most fun here. If you’ve missed out on Hughsey tickets and are looking for something mainstream, you might want to go elsewhere. Still, there is a lot of joy in watching the three performers on top form bouncing off one another and having a ball. It’s lighter, better performed and more snappily written than last year’s Stubborn Monkey Disorder. It’s brief, playful and the audience laughed all the way though, of course there were a lot of reviewers in.

If you can be sure of anything Bob enjoys working with people called Steve and he loves a biscuit. If you love Bob Franklin you won’t want to miss this.
Think it’s time for a cup of tea and a bicky.

The Writers is on at The Melbourne Town Hall Regent Room
http://www.comedyfestival.com.au/2013/season/shows/the-writers-bob-franklin-stephen-curry-steven-stagg