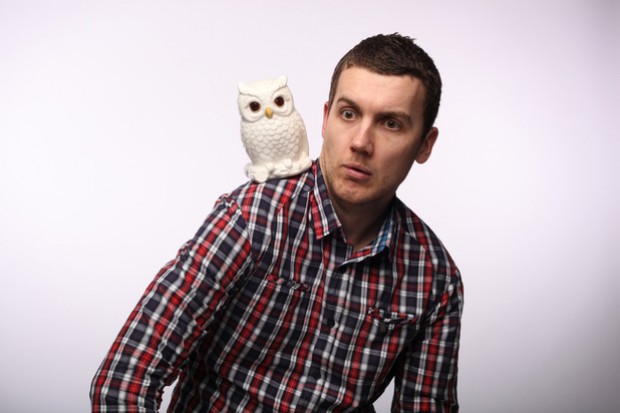 Daniel Connell is a laid back country boy with a delivery that reminded me of Dave Quirk minus any hint of darkness. He’s a personable personality to spend an hour with but as perplexed as anyone why he won a personality contest when he was five.

The first ten minutes of Daniel Connell’s show about travelling on public transport is completely dispensable and had me a bit worried. The one consolation was that those who arrived late didn’t miss anything important. When he did finally don his winning sash, he admitted that he didn’t remember anything about the win, which had me worrying again. This wasn’t going to be one of these festival shows that lures you in with an interesting premise that it then fails to address was it?

Thankfully Daniel was setting himself a quest and gradually, he pieces together the mysteries of that day and how he ended up in possession of a sash and white ceramic owl. Daniel paints a warm and amusing picture of his family in Batemans Bay with its Bowling Club, Rotary Club and Neptune Festival which hosted the Mr Personality contest in 1988, that he somehow won. He has tales of his mean older sisters, two wacky mates and parents with senses of humour as dry as his own. This is the backbone of the show and the most successful part.

He goes off on some tangents which are cleverly woven in. It doesn’t really matter that they’ve been shoved in, because his material about the ‘animals fighting in the wild’ website is clearly gold. Unfortunately the disappointing ending feels false and forced and despite some laughs doesn’t fit with the show we’ve just enjoyed and leaves a bit of a bad taste in the mouth.

Daniel’s style is often deadpan with a quick twinkle in the eye that stops it becoming too monotone. He has just the right amount of props and family photos to support his stand up and it’s not a bad way to spend an hour. With only a few cuts and tweaks there are the makings of a top notch festival show here.

Daniel Connell is performing at The Forum Theatre in the Carpet Room.
http://www.comedyfestival.com.au/2013/season/shows/mr-personality-1988-daniel-connell