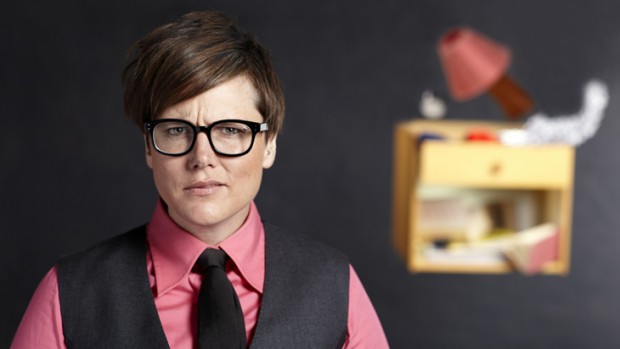 Well, that’s two years in a row that Hannah Gadsby’s impressed my pants off. I adored this show, it’s up there for my top show of the festival and we’re only half way through.

Hannah’s low key style and reserved demeanour belie a razor sharp and cheeky comic mind. The magic of this show creeps up on you as she gently and expertly takes you by the hand and leads you through a comedy journey about growing up and finding a sense of happiness.

As she points out, there is not a lot of comedy gold to be mined from contentment, so she shares with us some killer stories about embarrassment, losing her childhood innocence and losing her confidence which involve blind bunnies, the cruelty of children and bathing. The highlight that had the audience falling about, howling, was her description of a water slide adventure gone horribly wrong. She painted the sort of farcical scene you might see in a really good film comedy that makes you want to go out and see again.

There’s no wallowing in the low points of her stories, they’re as understated as her dry delivery. They are experiences she acknowledges are common to most people, but sets out so eloquently. That transition from the naïve fearless child through those horrible teen years that strip you of self-worth and if you are lucky bring you back to a more confident, happy but wiser adulthood. She chucks in the odd saucy innuendo along the way which delights the audience and seems to surprise herself.

I was thrilled to share this captivating journey with Hannah but was completely unprepared for the triumphant surprise ending that left me teary and joyful. This is exactly the kind of show I hope for when I go out to the festival. A superb comedian telling hilarious, poignant stories that will hang around long after the show is over.

Hannah Gadsby is performing up in the Supper Room at The Melbourne Town Hall.