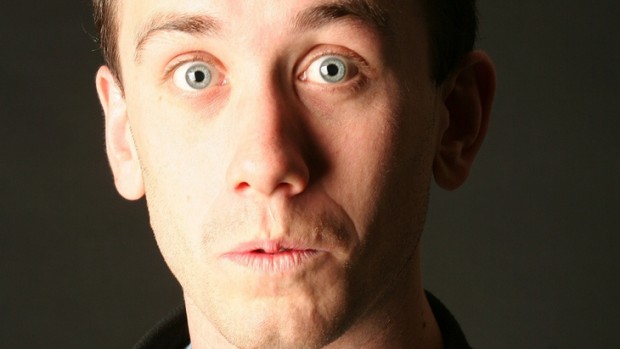 Danny McGinlay’s show this year is a bit like bumping into a friend in a pub you haven’t seen for a year who’s been having a whale of a time and wants to tell you about it all. Danny is a fine story teller and proficient at keeping an audience entertained, though the show feels a bit like it was thrown together in a rush. Well he’s been very busy!

If you saw his show last year you’ll know that he married into a Ukranian family and this show covers a little of that, a bit about house moving and a lot about their extravagant round the world honeymoon. There was a nice feeling of catching up on what happened next. From accidentally visiting Chernobyl to spending time with his vice squad cousin in Hong Kong to the wonders of the Japanese toilet in his Hawaiian hotel. All the stories were crackers and one of the final stories about a haunted house was actually quite terrifying and had the audience gasping.

Danny has an easy rapport with the audience and handles some audience participation effortlessly. It felt a bit disjointed however, with some of it seeming to be in the wrong order and some side comments that suggest they are about to become another story but are thrown away and not explored or gone back to. It gets a bit adult at times and he’s clearly enjoying ‘being a married man’, but having been introduced to his wife and new in-laws in his show last year, the more graphic material felt a bit weird. It certainly adds to the overheard pub conversation feel and also might help to explain why the show isn’t more polished (nudge nudge).

The title Hypertonic, though never explained, certainly describes the sort of year Danny has had and why, perhaps, he may have not had time to make this show live up to his last few exceptional Festival outings. Still, Danny is a talented comedian, who has put together a very entertaining way for fans to catch up with him and you can rest assured that you will have a fun night out.