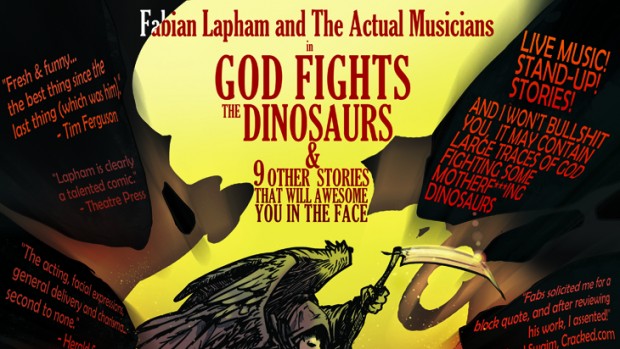 Part rock gig, part performance art piece, this elaborately titled show sees Fabian Lapham and band (Asha on guitar, Andy on bass, Cynthia on uke and vocals, and Shane on drums) deliver almost what it says on the tin (Fabian explains that the degree of awesoming to the face may vary). Through a set of clever, amusing songs they tell a series of stories about love, heartbreak, philosophy and the trials of life. As a sort of between song banter, Fabian offers up some very silly pieces of stand up, hilariously lame impersonations and Russell Crowe poetry.

Most of the songs have spoken monologues for verses which, even with Fabian’s speedy delivery, helps with clarity compared to if these lines were sung. It certainly removes the need for every line to scan properly and is a perfect fit for these narrative heavy tunes. Before you call laziness on this ploy, he can hold a tune when singing the choruses that need a male voice while Cynthia provides sweet vocals elsewhere.

The majority of the humour is in the form of the absurdist lines that pepper the monologues. It does so in a way that gets laughs at their silliness while propelling the story forward. The songs don’t have to build to a punchline as you would normally expect from musical comedy, these tunes instead wrap up the narrative neatly and musically which isn’t a bad thing when the content is so entertaining.

It’s interesting to see how they have made the music an integral part of the show, even when we appear to be between songs. All segments get some appropriate musical backing to create mood and often add humour in the process. The celebration of the third wanking joke of the show gets its own theme tune while a collection of left over one liners races a musical clock.

There is some very clever songwriting going on here. We get call-backs to earlier stories or offhand comments either through the storytelling or musical motifs. One song even outlines the life of another song with the chorus comprising the angelic performance of this anthem during the story. Not all of this musical magic is funny and themes of the some songs are downright serious, but it sure does create wonderful atmosphere for Fabian’s witty lines to shine like beacons.

The interaction between Fabian and the band is brilliant. All are mute (save for singing) and straight faced as Fabian spouts his often self-deprecating lines, regularly rolling their eyes at him as if they’d rather be elsewhere. The only display of emotion we get from the band is at the finale with some hilarious, carefully controlled mayhem while rocking out.

A brilliant fusion of comedy, music and theatre it’s a wonderful experience. Featuring beautiful song-writing and expert musicianship you will be tapping your toes as well as laughing heartily.

God Fights the Dinosaurs… is on at Northcote Town Hall