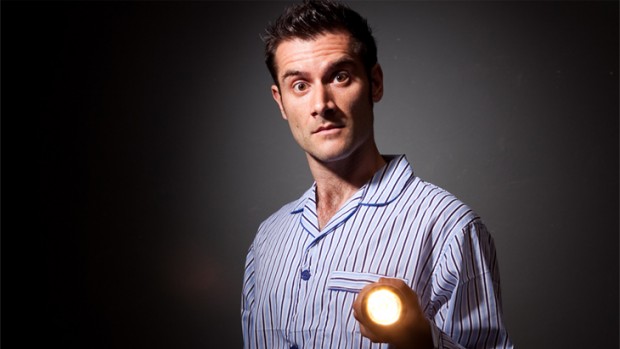 Mark Trenwith may be trying to leave his usual kids comedy persona behind with this adult show, but there’s no denying he is and always will be a big kid at heart.

But his new adult show After Dark is an attempt to distance himself from that world and present the darker and much more mature side to his comedy. Well, that’s his initial intention, but lo and behold the show quickly descends into just as much silliness as you’d see at any of his kids’ shows.

There’s something delightfully engaging about Trenwith; he’s not afraid to be goofy or make a fool of himself, and he does it all with a generous helping of good old-fashioned charm.

The show is a fun mish-mash of silly songs, nonsense games with the audience, bizarre facts and hilarious anecdotes from Trenwith’s run-ins with children at his Snot Bottom shows.

After Dark is an enjoyable hour of comedy that will remind you it’s OK to not take yourself too seriously. As Trenwith says, he’d much rather talk about Grug books and make silly faces at a dinner party than talk about serious adult stuff. And I have to say, I’m kind of with him on that.

This is lovely, funny little show from a delightful and charismatic performer.

After Dark is showing at Tuxedo Cat until April 21. For more information, visit:
http://www.comedyfestival.com.au/2013/season/shows/after-dark-mark-trenwith