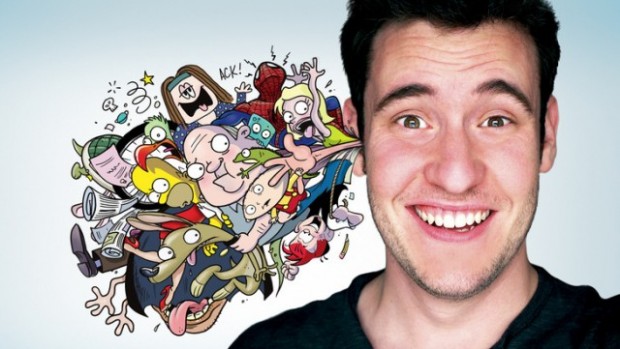 This is an autobiographical account of Jason Chatfield’s life from chubby misfit kid in Karratha, W.A. to successful cartoonist. He takes us through hilarious tales of misfortune, luck and learning that see him enduring shitty jobs and encountering many inspiring people (and just as many annoying ones) on his way to becoming the heir apparent to James Kemsley, last in the line of the illustrators for Ginger Meggs and leading figure of Australian cartooning.

The staging of this show is ingenious with an easel taking prominence under a spot-light. Not only does Jason use this easel to draw people from his tales on the sheets of paper but projected animations (complete with audio) bring these characters to life. This is an efficient way to work with Jason only required to draw the an outline (a rather detailed one at that!) with the projections taking over the moving parts. Not just an impressive and clever device, this adds further avenues for humour with the characters criticising the quality of the drawings to Jason’s mock horror.

Jason interacts with his animations brilliantly by using broad gestures and comically exaggerated facial expressions to react to the comments uttered by this cavalcade of eccentric characters. From his tactless uncles to the weird old man on his paper route to his boss from hell, these people take centre stage in some hilarious anecdotes.

Quite a few self portraits pop up during the show, all are self deprecating and chart his emotional growth. There is also an artistic party trick linked to a childhood story that adds an element of danger as he attempts to pull it off successfully.

Even without all the visual tricks Jason is an engaging storyteller. His comic timing is spot on and he has a highly animated (no pun intended) delivery. Despite telling us in the story that he always tended to blend into the background he is a natural charmer on stage.

A show that sets out to motivate and inspire as much as to entertain, Jason uses his considerable artistic talents to present a rollicking yarn about following your dreams through all adversity. This is storytelling at its best.

Stand Up Comic Strip Live is on at the Locker Room at The Portland Hotel
http://www.comedyfestival.com.au/2013/season/shows/stand-up-comic-strip-live-jason-chatfield