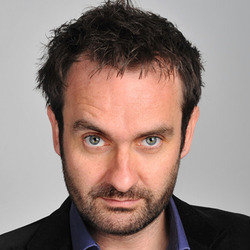 Gordon Southern is from Scotland, married to an Australian and living in Brixton. Apparently kerfuffle is a Scottish word, which is a fun fact. The audience were mostly from Scotland today, the ‘two for one’ Monday on a bank holiday brings them out, (according to Gordon – I’m not the one doing the racial stereotyping). The room is full and rather steamy.

The show has Gordon talking about his parents, living in Brixton during the riots, last year’s Jubilee and being married to a girl from South Australia (by the way, the number of UK comedians to go to Australia for a wife…. is there some sort of website where this gets organised?). It was a very subdued audience for the show this evening and Gordon wasn’t getting the laughs he expected at some points during the show, which I think was putting him off (he did mention the lack of response a couple of times).

There is a lot of good material in the show and it should become more polished as the festival goes on. The only props Gordon uses are some small animals and a sound machine. There are a couple of rap songs to finish the show and a tiny smidgeon of Greek mythology. Gordon’s interaction with the audience is polished and his fake biographies of a couple of audience members is well worked into the routines that follow. The stories about his dad and wife are well told and funny, but some of the linking material is a bit more edgy and experimental.

You can see it now while it’s cheap and he is still experimenting with his new material or wait a week or so until it’s (hopefully) seamless. The Kerfuffle would also have benefited from a more boisterous audience, but it was only 5.45pm and they’d only just started drinking.

Gordon Southern – The Kerfuffle is on at The Gilded Balloon Teviot at 5.45pm
https://www.edfringe.com/whats-on/comedy/gordon-southern-the-kerfuffle