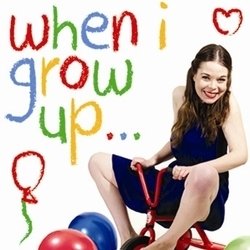 Last year I saw and enjoyed two shows by Juliette Burton and Lizzie Mace called RomComCon and Heartbreak Hotel. This year, Juliette has gone solo (Lizzie is still helping, but not on stage). The show is a personal journey for Juliette, who is attempting to find out whether what she does determines who she is or if there is more to life than one’s job description. I should admit here that I did contribute to the crowdfunding for Juliette earlier this year (to raise funds for the show), which meant I was receiving regular updates of the progress of the show…..oh hang on. You’re only supposed to declare an interest if THEY pay YOU. Curses! I’ll get the hang of this Cash for Comment thing one day…

I did refrain from watching most of the updates, so I could enjoy the finished product as a whole. The show starts with a multi-media look at the vocations Juliette wanted to be when she grew up, at different ages. There was princess, baker, popstar, ballerina, farmer, artist and others that I won’t mention for the surprise factor.  I do recommend interested people visit Juliette’s website to view the ballet school photo as Juliette, not the tallest of people, towers over her fellow pupils.

Juliette decided to see whether her younger selves had better insight by actually attempting each of these dream jobs, with varying amounts of success and some funny videos. She has also recorded a number of interviews with people about what they dreamed of and how their lives turned out and these are played on the screen throughout. Juliette meets some interesting specialists who give their opinion on how good she is at each attempt and there is a special guest from the Sammy J and Randy show who pops up on screen at one point. Not all of Juliette’s attempts were successful – she was escorted out of one or two venues during the filming. Note that if you have seen the show, there are extra bits of some of the filmed segments on the website (or DVD extras, if you like).

After most of the attempts are completed we delve a little deeper into Juliette’s psyche and the troubled teenage years (when she got caught up in eating disorders and mental health issues), where she lost sight of her dreams. But we do see her come through the other side to where she is today, questioning whether achieving ones dream is the answer or whether not letting go of the stuff of dreams will lead to fulfillment). The ending of the show is ultimately uplifting and worth the journey.

Juliette on stage is a cheerful and relaxed performer, who works well with the audience. The interaction with the filmed segments was faultless (good sign this early in the Fringe), the audience were boisterous and effusive in their praise and there was a big air conditioner at the side of the room to keep us cool. Pity that someone in a room next door spend half an hour scraping chairs or tables across a floor. If you are looking for a show that will make you want to give your dreams another go, pick up a musical instrument or some paintbrushes one more time, perform a pirouette or milk a cow, then this is the one for you. There is only the mildest of swearing but there are some adult concepts (anorexia), but it’s definitely one for the whole family to see.

When I Grow Up is on at The Gilded Balloon Teviot at 1.15pm

Bookings and further info from the Fringe website https://www.edfringe.com/whats-on/comedy/when-i-grow-up