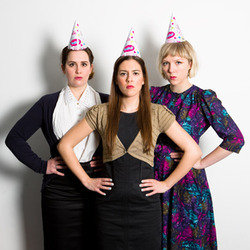 Birthday Girls 2053 is performed by Beattie Edmondson, Rose Johnson and Camille Ucan, who are former members of sketch group Lady Garden (last seen in sketches in the first series of BBC3’s Live at the Electric). Lady Garden had been favourites of the Edinburgh Fringe for the last few years (apart from last year) and I think that on the evidence presented in this show these three are the maddest ones from that group.

This new show, in a very crowded small room, is set in the year 2053 when everything good has been banned, including comedy. The girls are rebels against the oppressive regime and are performing a secret gig to fellow comedy lovers in a secret (surprise surprise) very crowded small room. The outside world in so polluted that everyone has to wear oxygen masks and full body decontamination suits (or as I was calling them – white summer onesies).

The sketches are hilarious but insane and include some extremely terrible puns and some hideous mental images. There is also a recurring soap opera which involves some of the worst Scottish accents to grace the Fringe stage (if there was a Scottish Tourist Police, the show would be shut down). There are some inadvisable dating tips from Rose and a few embarrassing revelations about Camille and Beattie throughout. The Finale recaptures elements of many of the preceding sketches in an explosive culminating sequence.

The three performers are all seasoned professionals, but that doesn’t stop them breaking out of character occasionally to pick on one another, which gave the show an refreshing spontenaiety. The show as a whole, was very much laugh out loud (to the point of tears rolling down the face) funny which had a storyline which almost made sense and wasn’t just used as a weak linking device for a bunch of sketches. If you enjoyed their previous work in Lady Garden or you are looking for something hilarious but surreal, then you can’t go past this show. As the room was full for a weekday at the start of the festival, I can predict that you will need to book early for your tickets,

Birthday Girls 2053 is on at Pleasance Courtyard at 6pm