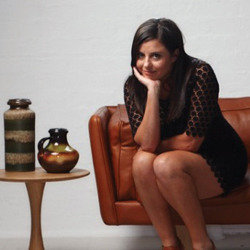 Myf, as Aussies will know, is a seasoned broadcaster and was a regular panelist on comedy music show Spicks & Specks. Now she is living in the UK and is hosting a genial day time chat show for the Fringe, which is also a podcast on the Assembly website.

The show, set in the massive Spiegeltent, started badly, with rain outside and a lack of numbers in the audience (Thursday afternoon and all the shows I saw were well down on punters) and a dodgy microphone. Once the problems had been sorted we had our first guest for the afternoon, journalist Steve Richards, who writes for mainly left-wing publications like the Independent and the Guardian. They spoke about his show Rock ‘n’ Roll Politics 2 and the funny little foibles that politicians have (the basis of his show) as well as talking about performing on the Fringe.

The second guest was Norman Lovett, best known for his role as Holly on the show Red Dwarf, who is doing his own show Old and New and we heard about that.

Guest number three was someone I had only vaguely heard of, Luisa Omielan, who is performing What Would Beyonce Do?!, which has sold out its ten show run and had an extra three shows added. She spoke about her show and I quickly realised I am not the target audience, not being a young female who listens to Beyonce or has seen Pretty Woman.

After the show plugs, the three guests and Myf had a chat about performing and we ended up hearing about deadpan Norman’s surprising love for the Sugababes and Lady Gaga. We also had some comments from Luisa about her opinion of critics, so I will say no more about that although, not being on Twitter, I don’t have much to worry about.

The show is very structured and is mostly designed for the podcast so that people can hear about shows they may be interested in. Myf is an amiable host and it was a fun hour in a dry tent with three entertaining guests. It is also a big bonus for her Australian fans that Myf’s show can be heard on the Assembly website until the end of the festival.

Showcatcher is on at Assembly George Square at 3pm

The podcast of this show can be found at (http://www.showcatcher.com)