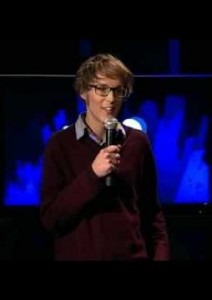 Jonathan Schuster’s show at Melbourne Fringe has a beautiful poster, an intriguing name and his show opened with some amusingly edited house music that got the laughs going and set up expectations for something different and interesting that he’d put a lot of work into. Then came Jonathan’s rambling intro which was a bit hard to follow but was basically an apology that his original idea for the show – as described in the poster – hadn’t panned out, because he hadn’t gotten around to writing his Bowerbird story, so had decided instead to structure the show around (ie wedge his material into) ‘Five Reasons Why I am Like a Bowerbird’ instead. This made my heart sink a little.

In the end, the show did deliver a lot more than his lack of confidence would suggest. The structure around Jonathan’s  stories works well, though after the Third Reason he seems to lose heart with the concept and doesn’t really point out four and five, though they are there if you pay attention.  The stories themselves are mostly engrossing with various levels of humourousness. He even told, much to our astonishment (considering his intro), a cute bowerbird story at the end, where for a moment Jonathan himself became the bowerbird, but I’m not sure if he noticed. It made me wonder, is the slacker persona and opening explanation a rouse to lower our expectations and surprise us…? Nah, the overall impression of the show unfortunately did not support this theory.

Jonathan’s strongest stories centre around penfriends (gosh, does this still happen in this day and age of Web 2.0?), his scurrilous letter to Slater and Gordon and his encounters with women. The high point was actually his response to a late coming audience member, who turned out to be a huge fan who delighted  him with a call back to Schuster’s gig material. It showed Jonathan to be a dab hand at audience interaction. One or two of the stories failed to elicit more than smiles and sort of petered out lamely. This material in particular needs some sharpening and more humour.

There were many points in the show where Jonathan said something like ‘if you want to know about that letter I wrote see my facebook’ or ‘if you want to know what a bowerbird looks like check out my poster’. Does he expect us to all turn on our phones and start googling during the performance? Do some homework afterwards? I wanted to point out ‘Hey see that big projection screen up on the wall behind you? You can use that to project things on. It would add some pizzaz to your show.’

Jonathan Schuster won RAW comedy in 2007, as he mentions cheekily throughout  the show and you can see why.  As his comedy festival show Dad! (And the Other Men My Mother has Been With)  showed, he is a talented comedian with a lot of potential. The evidence is here too, there are the bones of a fine little show, but at the moment it is a bit ramshackle and needs some work. Of course ramshackle can be funny, if pitched right, if you make that your thing, but after his rambling apologist opening, this simply came across as lazy. And lazy is something that Bowerbirds are definitely not. Bowerbirds are all about putting on the best show they possibly can.