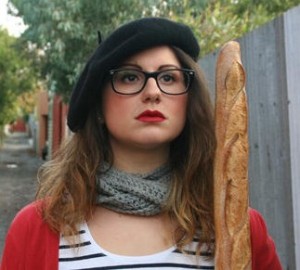 Comedy walking tours have been popping up as alternatives to theatre based shows over the past couple of years. One such tour is Jacqueline Mifsud’s We’ll Always Have Paris. This event requires the participants to suspend their disbelief as Mifsud uses Melbourne landmarks in place of Parisian ones while presenting a very accurate yet amusing commentary about the history of Paris.

First to put a preconceived notion to rest: you won’t have to navigate a thick comical French accent, she is not playing a snooty French woman. It was interesting to learn that she spent four years living in Paris and conducted tours for English speaking tourists, demonstrating that she knows her stuff. Including all the humorous lines into this fact heavy script and remembering it all was an impressive feat. She was able to make light of some of the more horrific data about French history with a witty disarming quip.

Numerous pop culture references are thrown into the narrative at every opportunity to add some giggles of recognition. The source materials vary wildly and span many years so it’s unlikely that you will recognise them all, but many will make you smile even when shoehorned into the topic at hand. Also making up the humorous content were plenty of innuendo and self-deprecation which added to her crazy tour guide persona. She generally kept up the fascade of us being in Paris by explaining away many of the Melbourne things staring us in the face which was a nice touch.

Jacqueline had a rather scatty ADHD demeanour to her performance. The constant verbalisation of her inner dialogue and frequent asides gave the show a very loose feel amongst her well executed spiels but also disrupted the flow at times. She was also easily distracted by events around us which gave her opportunities to make amusing off the cuff remarks but more often than not she lost her place in the script.

I was part of the Sunday morning tour (a rather leisurely stroll between the landmarks) and had heard that due to increased foot traffic the evening tours are a little bit chaotic, just like a European city crowded with multiple tour groups and hundreds of lone tourists. If you want to have a more authentic experience the 6pm tour fits the bill. Also note that the route includes a number of staircases so those with mobility issues may experience problems in keeping up with the group.

A wonderful Edu-taining event that appeals to history buffs and comedy fans alike, Jacqueline has created a fun way to kick of your day / evening at Fringe.

We’ll Always Have Paris departs from outside the Melbourne Arts Centre each weekend until October 6.
http://www.melbournefringe.com.au/fringe-festival/show/we-ll-always-have-paris/