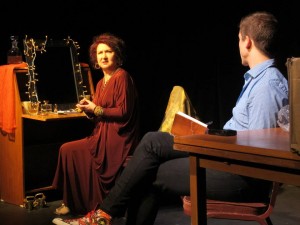 It warms the heart to see such fabulous intelligent, funny and moving Australian theatre being debuted at Melbourne Fringe. Songs for Europe – Two short plays about Eurovision, is what the title suggests, but don’t go expecting a glitzy, trashy Eurobeat style parody, ‘cause you will be disappointed. This is a more poignant look at how Eurovision has influenced the world and the people involved.

The first play Nothing by John Richards is an intimate portrait of an encounter between two people in the basement dressing room of a nightclub somewhere in Eastern Europe, while the sounds of bombing can be heard in the distance. Patrick, played with straightforward simplicity by Nicholas Colla is an English hipster freelance journalist writing an article about Eurovision. He’s hunting down certain ex Eurovision performers and is here to meet up with Sonja despite her disinterest and downright refusal in granting him an interview. Sonja is an aging Eastern European diva magnificently and intelligently played by Marta Kaczmarek. Their feisty parley is witty, clever and ultimately powerfully moving. 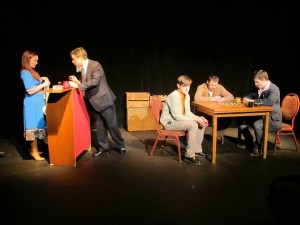 The second play is about revolution and Eurovision’s association with war and hope for peace in Europe. The Carnation Revolution by Lee Zachiriah is set in Lisbon in 1974, three men are waiting in a café waiting for a signal over the radio to start a revolution against a dictatorship. The signal is a song from Eurovision and it is based on a true story. A mysterious, menacing customer enters the café. Chris Broadstock as Diego is bland and unassuming on the surface, yet creates unease with word play that becomes tension you can cut with a knife. The performances here are all excellent, though you can’t help but notice Jack Beeby who has a small part in the first play and then is barely recognisable as the young keen, sweet, naive revolutionary Carlos who has the audience completely on side. Petra Elliott is also excellent as the capitalist café owner, wary of Diego and his potential for trouble but willing to sell her wares to whomever wants to consume them.

The stage is simply set with a drabness that suggests being back stage at a theatre that perfectly complements both plays’ themes of backstage / behind the scenes to Eurovision; and the reality behind a glamorous front. There are two televisions on each side of the set that play vision from Eurovision before and between the plays and they give the audience members a taste of Eurovision as well as setting up the next play.

Songs for Europe is a production of contrasts, inverse expectations, conflict and peace. Where the first play is intimate and personal the second is about the world stage and they complement each other well. The dialogue is clever, and all the performances in this production are excellent but Marta gently soars above the rest, her experience and conviction in the role evident. Her riveting nuanced, portrayal of Sonja will stay with you long after the play is over. Whether you are a fan of Eurovision or not, this is definitely worth hunting through the back streets of Brunswick for.

Songs for Europe is on at Broken Mirror til Sept 29th.

Note: Broken Mirror off Sydney Rd is actually a more comfortable performance space than many Fringe spaces. Not hot and stuffy at all.