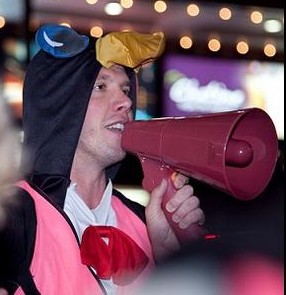 The year is 2113 and we are living in an environmentally-sustainable socially-harmonious utopia. You are a member of a tourist group exploring North Melbourne circa 2013, wondering how they got it all so wrong. That is the premise of Xavier Toby’s novel comedic walking tour ‘2013: When we were idiots’ – a refreshing, bizarre and often fascinating look at the Fringe’s home town.

Meeting in the foyer of the Fringe Hub, hi-vis vests are doled out to attendees and you are instructed to follow the penguin (Toby) outside. After hearing a quick safety chat and being informed that everyone on the streets around you is an actor, you set off for some learning.

Toby deftly weaves fact and “fact” as the group trundles about the streets of North Melbourne. You hear about the old Benevolent Asylum, Scrap metal merchant Old Ma Dalley and the history of the Hotham Football Club, but are also reminded of things like how we use waterslides as public transport in 2113.

There’s a strong social message throughout the show. Toby underscores the problems of 2013 with tales of how we are doing it right in 2113. In his utopia we’re working less, creating more and are generally a more caring lot. But for all its moral aspirations, the show never feels preachy. After all, we’re from 2113 and all these wonderful changes have already occurred, so there’s no need to harp on about it. Everyone’s already on-board.

Micah Higbed is glorious as a series of historical special guests, ripped from their own times and sporting some questionable costumes. His “mystical” psychic, whose name seemed to be some sort of high-pitch shriek, was a highlight of the tour. There’s also a quick stop for some poetry with Emily Andersen. Her ode to hipster boyfriends is a perfect little slice of 2013 Melbourne.

Some of the best moments came from the group’s interactions with strangers on the street – all of whom were remarkably good-natured about being set upon by a large group of neon gigglers. A beautiful sense of camaraderie develops and at the end of the 90 minutes, you do feel a bit like a group of travellers from somewhere better, out of your own time.

2013: When We Were Idiots starts at the Fringe Hub – Lithuanian Club Foyer and is on until October 5.