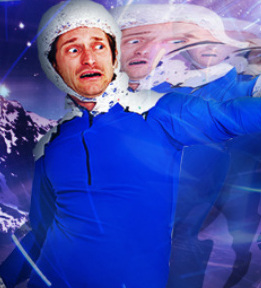 Marek Platek is here to regale us with tales of travelling back and forth through time and reveal what we can expect in the future. After the world’s most awkward costume change, we meet a time travel ticket inspector who is seeking our assistance in capturing a time fugitive. This is all happening because of a Worm Hole.

Decked out in blue Lycra and aluminum foil, Platek told us of his adventures. There are jokes about meeting himself and getting the chronology wrong. Rather lame facts about future customs and conventions were told with exaggerated gravitas including some social satire that was a bit too blunt to be amusing. There was a brilliant bit of historical political humour in his routine about which country replaces the USA as dominant nation. It was a real mixed bag in terms of humour, all delivered in an almost stream of consciousness manner while he ridiculously slinked about in his wacky outfit.

Although this performance contains enough humorous ideas to catch your interest, you get the feeling that this was two similar ten minute concepts that had been stretched to forty five minutes. It’s essentially a guy from the future bragging about being a time traveller and not much more. There were long sections where the audience were smiling rather than laughing, which he tried to remedy with more slinking about the stage.

A self-penned book (with an impressive cover knock up) was his main prop. He playfully spruiked it to us and read a poem from it (a verbatim reciting of a familiar song with little additional humour added). There were a couple of prop weapons that were briefly referred to in minimal detail and never seen again. It was a wasted opportunity.

There was little in the way of plot development and the main character didn’t actually go on a spiritual or physical journey during our time spent with him. He just did his boasting and posturing before disappearing.

The lone costume change took place behind a sheet held by audience volunteers. He didn’t engage with these punters very much as they were merely glorified tent poles. As he awkwardly changed, he attempted to maintain some banter with the audience which comprised of asking for suggestions of time travel themed movies. Not much was done with these titles beyond saying “yep, that’s a good one.”

Appearing in a different coloured Lycra jumpsuit (breaking his own time travel logic!) and a ridiculous headpiece, the Inspector addressed us in a similar manner to Platek. His inclusion in the show was for a single routine about two similar Hollywood actors. Once done with that bit he wandered out of the venue with the audience not exactly sure if that was the end of the show.

Platek should be applauded for embracing the spirit of the Fringe and going off the beaten path, but in this case it didn’t quite make for a complete show.

Worm Hole is on at Club Voltaire until September 29
http://www.melbournefringe.com.au/fringe-festival/show/worm-hole/